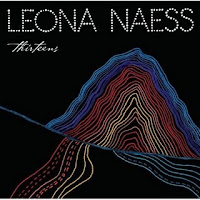 The legacy of Lilith Fair, much like the remnants of grunge (now billed as “flyover rock“), is a disappointing one. The grunge-infused feminist folk-rock of the mid-90s sounds dated, same-y and trapped in a four-chord box in 2008; its daughters are wafer-thin pop props like Michelle Branch, Vanessa Carlton or worse, Miley Cyrus. Hardly examples for America’s insecure youth. But there’s some hope in the new generation of kinda-rockin’ female singer-songwriters — Feist is the obvious bright light, and fresh-faced strummers such as Ingrid Michaelson and Sara Bareilles are bridging the gap between art and charts.


Better than all of them is Thirteens , an unexpected gem from New York songwriter (and Ryan Adams sometime-collaborator) Leona Naess. She arrived to the embers of the Lilith scene in 2000 with Comatised , an album complete with an angsty ’90s cover and a similarly grrrrly first single, “Charm Attack.” But she was late to the party, and the next wave of prettier, poppier young things quickly paved her over — until now. Thirteens , her first album in five years and fourth over all, is a wise, beautiful record that moves with the ease and comfort of an old friend — a collection of understated folk-pop gems that occasional erupt into speaker-pushing choruses but never reach for the radio.

Not that this isn’t a pop album for everybody — it should be handed to every 14-year-old girl in America on the first day of freshman year, and their brothers, too. Neither empty empowerment anthems nor heartbreak hotel ballads, these songs deserve to soundtrack girls-night film montages and romantic walks through leaf-strewn parks for years to come. The songs are admittedly complex; there’s a tenderness and delicacy to a song like “Not the Same Girl” that will keep it off the dial, and maybe even out of Starbucks. The track finds Leona singing about the cynicsm of aging with lines such as “You’re not the same girl who has butterflies and believes them,” but it’s sung with more nostalgia then regret, and soon she changes the subject to “we.”

On Thirteens, Naess is that rare songwriter who realizes her experience should be a window, not a mirror — she often begins with a personal narrative before addressing the listener, or better, that all-inclusive “we.” In a way, she reminds me of Elliott Smith; I can think of no higher compliment. Her songs are neither self-help mantras or solipsistic navel-gazing; they’re simply a set of sisterly storytelling. “Lipstick” is a Feist-y jazz-chord runaround that finds her in a “dress that shows my legs,” making some former lover “run around like a fool.” “I walk into the room, talk to everyone but you,” she winks, admitting “I know I’m acting like a little girl.” The album’s finest moment is “Leave Your Boyfriends,” a track which culminates in a chorus of men and women chanting, “So let’s go out late, drink a lot, stay up past 8 and then dance, dance all night / leave our boyfriends behind / leave your girlfriend behind.” It’s an ode to joy and possibility, even with its undercurrent of escapist pain — a singalong for adults with a lesson for all ages. Thirteens is full of them.