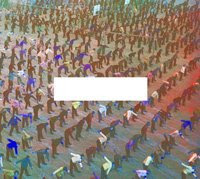 Editor’s note: Women’s self-titled debut is a stunning album, perhaps the year’s most vital 30 minutes; while it will will place high on my year-end albums list, I haven’t blogged on it and don’t want it to get lost in the crowd. Also, I’m on vacation and I have a million blurbs to write to do this year-end list properly so I may just wait for the site relaunch in January. (We’re relaunching in January!)

The closest thing 2008 had to a trend this year was the emergence — and prominence, at least among listeners who still care about new rock music — of a fresh, experimental lo-fi scene, one that ranged from No Age’s Smell-y noise to Vivian Girl’s throwback pop soup. But despite the hype, and the shot of energy the waning indie scene so sorely needs, too many of these bands’ albums are full of underwritten tracks hiding under tape hiss and two-minute runtimes.

By contrast, the music of Women is written so well, they only need two minutes. “Group Transport Hall,” my favorite track on the record, clocks in a 1:10 — enough time for the band to tap into Caribou-like neo-psych and Neutral Milk Hotel’s acoustic crunch and sing “Soon we will be laughing… / now it’s too bright / you made other plans” in sweet harmonies. The song finishes on that line, and leaves one wondering — what were they? Is the song about a vampire — or a girlfriend? Silly, sure, but that’s the kind of rich ambiguity that Women leave us, resonating images left for the listener to color in. Coupled with guitarwork that careens forward like a train running off the rails (or Wolf Parade on coke), the album is a bracing listen that begs for repeats.

Lead guitars duel, Television-style, on “Shaking Hand,” and while other acts would’ve let the rift repeat into oblivion and have distortion levels take care of the rest, Women up the ante, dropping in a countermelody and a second drummer. It’s frantic, furious stuff, but with energy hammered into the firm lines of song — not just sound. Even when the band unleashes the roar on the album-closing “Flashlights,” there’s a method to its madness — and while some credit likely goes to producer and Calgary heavyweight Chad VanGaalen, it’s Women who have found a way to marry bleeding sonics with serious talent.