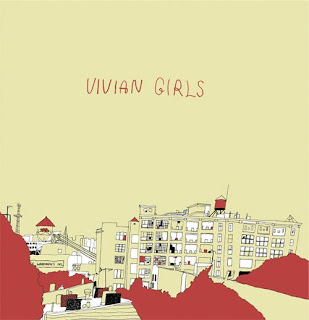 Pretty girls playing noisy guitar pop sure is charming, huh? If I wanted to wear my checkered dress and red flats and dance like nobody was watching (especially not the boy), I could think of no better soundtrack. I get the appeal of Vivian Girls — they’re retro, they’re jangly and they’re cute. But, uh, isn’t jangle pop supposed to be, well, pop? Vivian Girls have had a lot of tags and references thrown at them as they’ve collected gushing review after gushing review for their self-titled debut — loft pop, Slumberland, Phil Spector, lo-fi — but they’ve learned little from their elders. Vivian Girls is full of proto-garage chord changes and psych-pop harmonies as substantial as cotton candy, drowning in distortion behind the curtain of the Emperor’s new four-track. If acts like Yeasayer and No Age are any indication, guitar pedals may be the new melody these days, but one mark of great music is being able to remember it after listening to it a few times — and fifteen years ago, some now-forgotten bands were making songs you could.

Though the Pacific Northwest twee scene has been well-documented in the decade or so since its twee pop glory days, much of it remains as underground and elusive now as it was then. So, Vivers, let me point you in the direction of a single record that could change yr xlivesx: Tiger Trap’s 1993 self-titled album.

Take single “Supercrush,” a song chugging with wooly guitar fuzz, teen angst, hovering harmonies — and a chorus that’ll play in your head for days. “I’ve got a supercrush on you,” Rose Melberg (soon-to-be frontwoman of the Softies, another Rawkblog all-time favorite) sings with all the twee-as-fuck gusto she can muster, a far cry from echo-chamber Brooklyn disconnect but equally loud. Instrumental “Tore a Hole” bristles with post-punk drumwork and a Smiths-on-speed lead guitar, and “You and Me” cruises on a classic three-chord groove until the band hits the chorus, stops like a car crash and starts again.

The rest is just as good. Tiger Trap played furious, passionate stuff, punk rock for kids who loved singalongs and heartbreak. If those are things that interests you, well, you might want to leave the loft.

It’s been a long time since then, of course, and with Tiger Trap’s twee relegated mostly to history, there’s certainly a place, even a need, for bands like Vivian Girls in today’s pop landscape. But you have to start at the source. This post hints at some larger issues (derivation vs. tradition, pop music’s tendency to eat and regurgitate itself) and I’ll save my opinions on those subjects for another day, but for now I’ll note that I’m bothered by Vivian Girls and the like not because they’re an imitation, but because they’re a pale one.

(Note: In fairness, the Vivian Girls song below stands with any classic from the era — it’s one of their few inspired moments.)

Vivian Girls – “Where Do You Run To”: mp3 (via Stereogum)