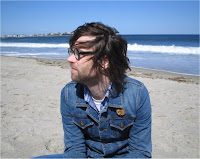 I’m glad the toppling journalism economy (holla @ u later, Tribune) has room for one more among its somewhat-still-hallowed ranks. Ryan Adams’ first piece for the magazine appears here. He writes about, well, being a writer. At some point I’m hoping that if I keep blogging about him, he’ll start blogging about me blogging about him and it’ll be this awesome buddy comedy and he’ll take me on tour. (And no, Rawkys voters, there will not be less Ryan on Rawkblog in 2009. But you’re welcome to keep the votes coming!)