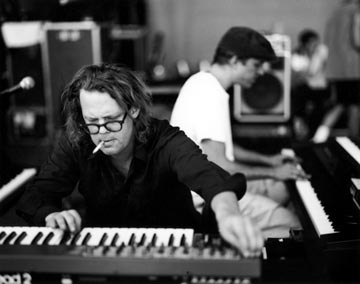 (Editor’s note: An earlier version of this post first appeared in August 2007.) The late Jay Bennett (pictured at left) was so forcibly and publicly removed from Wilco that it almost seems wrong to remember he was once an essential part of the band. But though the cameras of I Am Trying Trying to Break Your Heart: A Film About Wilco (a truly great rock doc, by the way) captured his unceremonious firing, they also captured his contributions to the band as he shredded through guitar solos and hit tight harmonies. This Summerteeth-era performance by Jay and Wilco frontman Jeff Tweedy is an acoustic one so Bennett doesn’t get to jam on his beloved “easy rockers,” but in retrospect, and especially in light of Jay’s tragic death earlier this year, it’s an historic gig: the apex of the two songwriters’ partnership, demonstrated in 20 catalog-spanning songs. While I’m glad Wilco ultimately went in another direction, there’s no denying the charms that Bennett brought to the group.