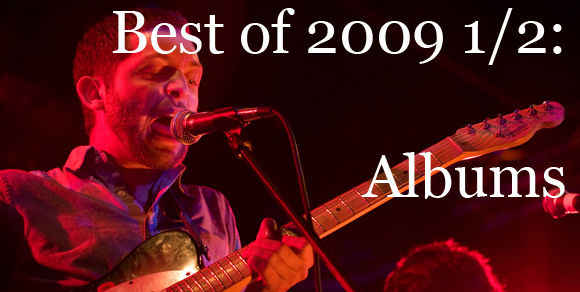 The 20 best albums of 2009’s first six months, after the jump. Now with more Animal Collective (and, um, Mandy Moore)!

1. Harlem Shakes – Technicolor Health
The year’s best album comes from its most exuberant new band. Harlem Shakes are a love ’em or hate ’em type act — they’re from Brooklyn (strike one), yelpy (strike two) and blend wiry guitar rock with the occasional Latin rhythm (colonialism! strike three). But unlike all most of their borough colleagues, they don’t take themselves or their scene too seriously. That, and a collection of extremely dense jams that filter every good indie rock idea from the last half-decade, makes them too endearing, and far too talented, to deny.
>>Harlem Shakes – “Strictly Game”: mp3

2. St. Vincent – Actor
Did I say dense? Annie Clark’s follow-up to her debut album as St. Vincent, Marry Me is also a lot to swallow. Her new songs are foggy epics that lack the pop road signs of Marry Me‘s best moments, instead choosing a more atmospheric, evocative approach that makes heavy rotation essential. Dozens of listens later, Actor still has more to offer — we may never reach the bottom.
>>St. Vincent – “Actor Out Of Work”: mp3

3. Grizzly Bear – Veckatimest
Delivering on the promise of Yellow House, the Brooklyn four-piece returns with a more athletic collection. The guitar pyrotechnics on “Southern Point” bring the sort of thunder Stephen Stills must have hoped for when enlisting Neil Young to join Crosby, Stills & Nash for Woodstock, while on songs such as “Ready, Able” and “Foreground,” co-frontman Ed Droste offers a serene, Radiohead-influenced flight through the clouds. Friend-of-Rawkblog Ed also happens to be one of the nicest guys in indie rock, but the songs, as I’m sure you know, speak for themselves.
>>Grizzly Bear – “Cheerleader”: mp3

4. Bill Callahan – Sometimes I Wish We Were An Eagle
Eagle flies toward the top of Bill Callahan’s catalog under both his Smog moniker and his given name, a collection of darkly funny songs that poke fun at his own misery (“Eid Ma Clack Shaw”) even as they admit the depths of his despair. Thanks to a clean, clear production approach draped in strings and luminous electric guitars, the music is no less powerful.
>>Bill Callahan – “Eid Ma Clack Shaw”: mp3

5. Phoenix – Wolfgang Amadeus Phoenix
If not for a couple of weak moments (both parts of “Love Like A Sunset,” “Big Sun”), WAP could’ve been an easy pick for album of the year. Never before has the French band sounded so supremely confident in their glistening neo-power-pop as they do on tracks such as “Lisztomania” and the synth-fueled “1901,” titanic jams that deserve to make the band bigger than Coldplay. That may yet happen. In the meantime, let’s enjoy this record before your little sister discovers it and trades in her Jonas Brothers discography.
>>Phoenix – “1901”: mp3

6. Animal Collective – Merriweather Post Pavillion
Beach Boys comparisons may be worn out with Animal Collective by now, but on MPP, they’re truer than ever. Swampy samples aside, it’s album full of stunning harmonies and counterparts delivered with earnest, surfer-teen enunciation — as obvious a Brian Wilson homage as it gets. The lyrics deal in many of Wilson’s preferred subjects as well, with Avey Tare and Panda Bear yearning for simple lives with their women in comfortable summertime clothes. On tracks such as “Guys Eyes,” the band’s abilities shine like sunlight through stained glass, unmistakable and gorgeous — so why continue to hide them behind ostensibly “avant” fart noises when the band is so close to California pop bliss? God only knows.

7. John Vanderslice – Romanian Names
One of the most consistent (and humanistic) figures in indie rock churns out workmanlike new releases almost yearly, but Romanian Names is a break from Vanderslice’s typical albums. It’s heavier on the keyboards, for one, but more importantly, something has set off a new attention to beauty in the producer/songwriter. Romanian Names is by far his prettiest album and perhaps, too, his most heartbroken — traits that make it his best work since 2004’s Cellar Door and, of course, a member of this list.
>>John Vanderslice -“Too Much Time”: mp3

8. Wilco – Wilco (The Album)
I feel relatively guilty about this. Wilco is my favorite working band and arguably, with discography, live shows and other elements factored in, the best act of the decade next to Radiohead. And the first half of Wilco (The Album), the band’s second disc in a row with its Nels Cline, Pat Sansone and Mikael Jorgensen-featuring six-man lineup, is one of the band’s best sides. “Wilco (The Song)” is an energetic, self-effacing mission statement (and obvious jam), “Deeper Down” and the Feist-featuring “You and I” are both striking ballads, and “One Wing” and “Bull Black Nova” return to the soaring guitars and gritty paranoia of A Ghost Is Born. But once the band shifts into classic rock easy rockin’ with “Running On Empty” “You Never Know,” the album kind of goes off the rails. So you can see my predicament. We’ll see how it holds up in a few months — till then, though, they’re still Wilco (My Heroes).

9. Reverie Sound Revue – S/T
An album I’ve found myself writing a few times about here, Reverie Sound Revue is the kind of disc I’ve been waiting for a band like Metric to make for years. It’s sharp, sleek indie pop from a former Broken Social Scene touring singer, Lisa Lobsinger, but she sounds better on her own material than she ever did with “Anthems For A Seventeen-Year-Old Girl.” While its sophisticated sound may be too cocktail party chic for lo-fi loving Kids Today, more discerning listeners will find a flawless summer soundtrack.
>>Reverie Sound Revue – “An Anniversary Away”: mp3

10. Neko Case – Middle Cyclone
Another surprise. I’ve always loved Neko, but Middle Cyclone — as with Bill Callahan’s album — is more vulnerable, and far funnier, than she usually allows herself to be. The alt-country mainstay’s trademark voice is as unstoppable as ever, and whether she’s applying it to a tale of a tornado in love or any number of animals, she makes a joyful, tumbleweed-tossed noise.
>>Neko Case – “People Got A Lotta Nerve”: mp3

13. Mandy Moore – Amanda Leigh
Believe it or not, the former “Candy” singer is all grown up — Amanda Leigh is a shockingly excellent homage to ’70s songwriters such as Joni Mitchell and Todd Rundgren (and too, to husband Ryan Adams). Don’t sleep on this one.

15. Asobi Seksu – Hush
The band peels back the shoegaze for a dreamy gem of an album.

16. God Help The Girl – S/T
Belle & Sebastian’s Stuart Murdoch turns to feminine muses (and lead singers) for a Broadway-minded loose concept album. It’s a story we’ve heard before, but one no less charming for it.
God Help The Girl – “Come Monday Night”: mp3

17. Dave Matthews Band – Big Whiskey & The Groogrux King
Would you believe me if I said this was the band’s best (and only relevant) album since the 2000-ish leak of the Lillywhite Sessions? And that I’ve been waiting for it ever since? It’s true. Dave-hating trolls who really just still can’t stand their stoned, smelly college roommates can read my defense of the band here.

19. The Rest – Everyone All At Once
An ambitious debut, and not one without accompanying flaws, but the orchestral bombast and the band’s visible emotion carry it home.
>>The Rest – “Apples & Allergies”: mp3

20. Strand Of Oaks – Leave Ruin
After Callahan, the year’s most affecting folk release. Singer/songwriter material with a violent dark side and a compelling delivery.
>>Strand Of Oaks – “End In Flames”: mp3

Previously: Best Of 2008: Albums of the Year | Lists Archive