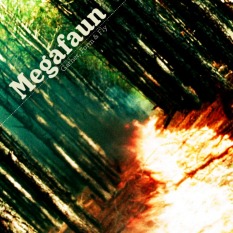 Credit where it’s due: Megafaun’s Gather, Form & Fly is an album that tries. While their pals in Akron/Family seem to have lost the ambition to seek out anything farther than the end of their bongs, Megafaun’s sophomore album ranges from harmony-soaked ’70s soft-rock (excellent), to hard country dappled with worldbeat and psychadelic elements (ambitious; occasionally unsuccessful) and back to more traditional sounds.

While the sweet stuff is the band’s wheelhouse (and I wish there was more of it), it’s the chunky middle of the record that makes the North Carolina act a band to watch — they push the twangiest elements aggressively to the forefront and let the Latin rhythms and psychadelic sounds play out under them, a refreshingly non-gimmicky approach but one that may test the tolerance of country neophytes. Still, this is a band that’s not afraid of ideas; would that their listeners were equally fearless.