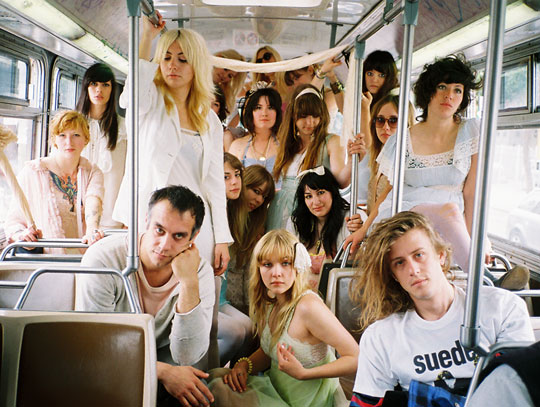 The great thing about Album, the debut of Girls (not to be confused with Dum Dum Girls, Vivian Girls, Girls Against Boys, Sun City Girls, Girl Talk, Girlsareshort, or groups with actual girls), among its many great things, is that I have no idea what the hell the band is trying to do. In an already infamous interview with the U.K.’s Guardian, the duo talked about growing up in a cult, palling around with millionaires and taking handfuls of prescription pills on the regular, so they may be unreliable narrators as it is, but listening to Album doesn’t make the group any less inscrutable.

Musically, they’re a more retro Galaxie 500 or The Jesus and Mary Chain — a little psychadelic, a little bluesy, mostly reverberating. That’s the easy part. It’s the rest that’s confusing. In some songs, they’re head over heels for females in a way that’d make Brian Wilson blush (“Laura,” “Lauren Marie”), but in others they’re singing about looking for boyfriends (“Lust For Life”). Sometimes, they’re sad and serious (“Laura” again, “Hellhole Ratrace”), but at others, they’re sock-hopping and hopped up on drugs to the beat of “Back In The USSR” (“Big Bad Mean Motherfucker”). Are they straight? Gay? Happy? Sad? Retro fetishists or Vivian Girls satirists?

Luckily, Girls are a band and not a Who Wants To Be A Millionaire? question, so we can safely go with D) all of the above. Instead: Who Wants To Listen To A Great Album? This guy. And you guys.

(Album is out on True Panther/Matador on 9/22; the band opens for Los Campesinos! [ugh, I know] at the El Rey tonight)