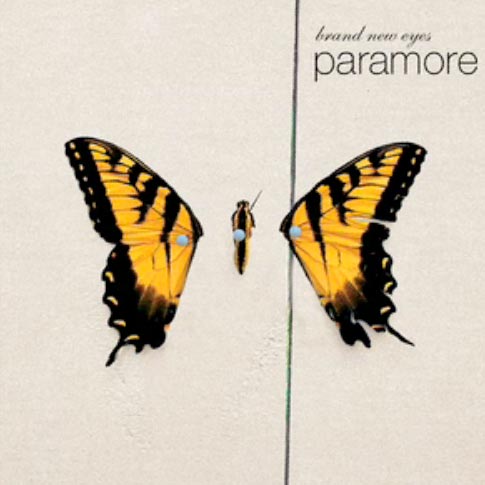 1) They are prominently featured on the Twilight soundtrack.
2) They held listening parties for Brand New Eyes at Hot Topics across America.
3) They just co-headlined a tour with Jimmy Eat World.
4) They are played on modern rock radio.

Dudes, I’ve long since stopped believing in the idea of a “guilty pleasure.” Regardless of ’00s poptimism, it’s an almost inborn inclination among the indie set to recoil from anything that’s too popular. This is fucking stupid. Did you stop eating ice cream cones because you discovered tiramisu? Did you stop listening to Grizzly Bear when they had a track on the New Moon soundtrack (because they do as of today, ZOMG!)? Music is music. Divisions (and “cred”) are for insecure 15-year-olds understandably looking for social groups they can relate to. But, grown-ups, can the rest of us please move on?

Paramore’s Brand New Eyes, the follow-up to their stellar Riot!, plays into plenty of modern rock tropes, and on an initial listen, you might get hung up on the standard-issue guitar tones and aggro power chords, but arguably, no better act has come out of what’s left of “alternative” in the last decade. Unlike the pop-punk/jock-core acts they’re grouped with, the band plays serious songs, full of incisive, unpredictable songwriting shifts that turn on a dime thanks to the most dynamic rhythm section on the radio. But what pushes them over the top are the unreal vocals of 19-year-old Hayley Williams, a monster rock singer who could probably split open Axl’s dreads with the right note. On Eyes tracks such as “The Only Exception” (the best Coldplay song since Parachutes) and “All I Wanted,” she reveals a maturing sense of nuance that proves she, and the band, can do pretty as well as angry.

In short, the young band has returned with an album that proves them among the most promising acts in any genre. Heavy, catchy and start-to-finish exciting, I can’t imagine many people who give it an honest listen being able to avoid embracing it — guiltily or not.