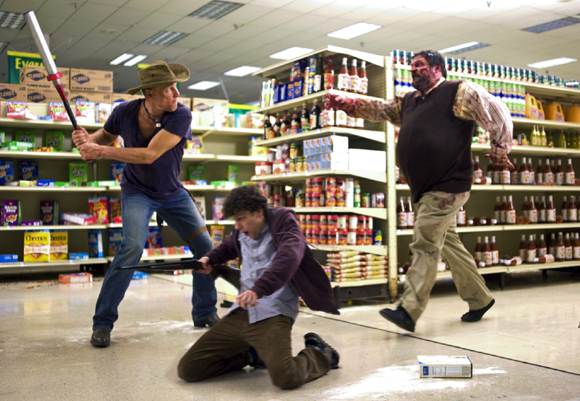 I’m all for dramas. Deep characters, sensual camera work, period dress — all worthwhile pursuits. But for my money, there’s nothing more satisfying at the cinema than a movie with a healthy appetite for the absurd — and Zombieland is ravenous. The latest entry into the burgeoning horror-comedy genre, Zombieland never slides into the schlock or B-grade self-parody of, say, Lesbian Vampire Killers or Zombie Strippers. Instead, it’s an American answer to Edgar Wright and Simon Pegg’s brilliant Shaun of the Dead, a keen comedy with hordes of the undead as backdrop.

While Shaun was essentially a romantic comedy, Zombieland is a dystopian-set coming of age tale, centered on a nerdy shut-in (Jesse Eisenberg, playing a, well, Jewish Michael Cera) whose numerous neuroses have made him one of the few survivors of the zombie plague. His rules for living — some 30+ dictums — make for an effective running gag, as does a pitch-perfect Woody Harrelson’s (a baseball bat-toting badass with a hidden heart of gold) hunt for America’s last Twinkie. When the movie gets interesting, though, is when the unlikely pair happen upon two sisters (Superbad and The House Bunny‘s talented Emma Stone and Little Miss Sunshine‘s Abigail Breslin) who shrug them off at first — but gradually learn that four work better than one.

Pop culture references abound, including one particularly genius cameo in the movie’s second act, but the characters’ relationships ring true even as they cruise around America blasting zombies with shotgun shells and indulging in hedonistic property damage. It’s all ridiculous — and played perfectly. The flip-side to the end of the world, Eisenberg’s rules aside, is that real-life responsibilities end, too. Zombieland is a great escape.