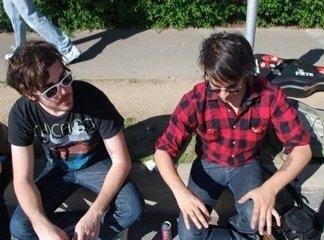 It’s been over a decade since Mercury Rev’s Deserter’s Songs and Neutral Milk Hotel’s In The Aeroplane Over The Sea, two albums that pushed the boundaries of chamber-pop and psychedelic rock in an era of indie innovation that has few rivals. Without shouldering them with the burden of exaggerated expectations, blossoming Los Angeles act Pepper Rabbit picks up where those records left off — stylistically, if not yet quite qualitatively. But on two self-released EPs, the band’s music aches with potential.

Throughout, Pepper Rabbit goes dark and deep, letting reverb play as much a character as its majestic arrangements. The insistent pianos of “Red Wine” march with sober verve as Xander Singh’s sweetly strained tenor echos Mercury Rev’s Jonathan Donahue — or more recently, that of Deerhunter/Atlas Sound frontman Bradford Cox. On “Harvest Moon,” they showcase the woozy European flair that has served bands like Beirut so well, while “Snowalker” turns softer with a wash of harmonies and an avuncular banjo.

In other words, folks, Pepper Rabbit — not to be confused with Peter, Frightened, or White — are 2010’s first band to watch. Let’s make ’em feel at home.

(The Click and Shakes EPs are out now on iTunes, with a wider release planned for next year)