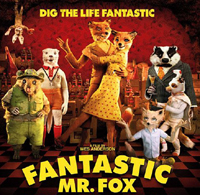 I was left ambivalent by Wes Anderson’s last effort, The Darjeeling Limited — a movie alternately palpably emotional and adrift in its own myopic quirk (and reviewed by me here). Fantastic Mr. Fox is a return to form, and really, a new form for the director: stop-motion animation, which under his precise eye is a joy to watch. (Between this and Coraline, can everybody but Pixar really just hang up the CGI, please?) George Clooney and Meryl Streep lead Anderson’s usual gang (Jason Schwartzman, Bill Murray, Owen Wilson, etc.) as the voices of a band of eccentric animals playing out the rakish adventures of Roald Dahl’s book of the same name.

The director has always been interested in the darker motives of human nature, and with Fox, he seems to poke fun at himself — “I’m a wild animal,” the titular hero tells us, even as his cohorts chat on mobile phones and brandish credit cars. The dichotomy’s clever scripting makes for a number of laughs, but it’s the film’s acrobatics and elegant visuals — shot always at precise, f-stopped right angles — that turn Fantastic Mr. Fox into Anderson’s most exuberant work. Welcome back, Wes. Now, can we boldly go?