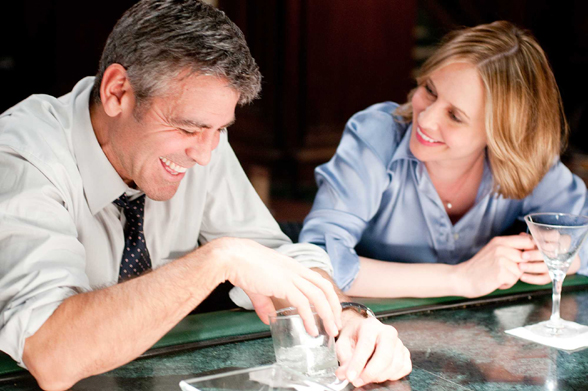 Up In The Air ought to soar. It’s one of the most well-reviewed films of the year and the closest thing there is to an Oscar front-runner, with a sterling lead performance from George Clooney and deft direction from a past Academy darling, Juno helmer Jason Reitman. And yet, it’s not an effort without turbulence.

The film, an incisive piece of zeitgeist-capturing, deals with Clooney’s Ryan Bingham, a man who fires people for a living. He accomplishes his duties with understanding and warmth, but despite his apparent humanism, he’s happiest flying solo – slipping from hotel to hotel, rental car to rental car, racking up frequent flyer miles without a friend in sight. His flying fortress of solitude is his life, until he meets a curvaceous businesswoman (Vera Farmiga) in the same boat – er, plane.

The movie flies highest when it captures the budding couple’s considerable sparks (aside: Elliott Smith’s “Angel In the Snow” soundtracks a romantic winter wonderland scene) or focuses on the realities of the recession via documentary-style interviews. It stumbles when it tries to juggle too much, most notably with Natalie Keener (Anna Kendrick), an Ivy League-bred wunderkind addition to Bingham’s company who turns shrill and emotional after being plucked from her bubble. Given the chance to soak up Bingham’s ease and experience, she doesn’t; she never seems more confident or graceful, and her arrested development leaves her a less resonant vehicle for Bingham’s own character arc.

The story nails its parallels of work and family, firings and sudden splits, but the simple truth of its theme – tough times are best weathered together – is muddied by its final scenes and a voice-over that waxes too philosophical. Still, there’s much to celebrate in Up In The Air, a moving, affecting work merely in need of a few more moments of sunny skies.