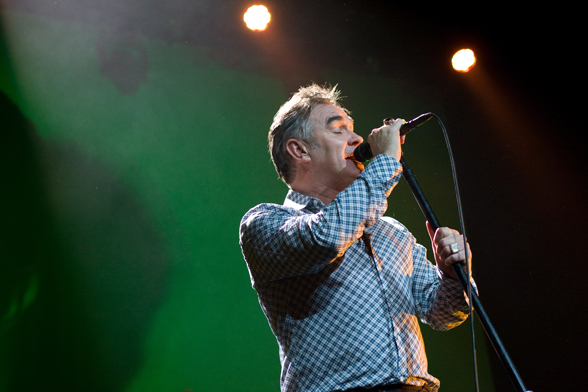 Oh, Morrissey, you most un-arena of rockers. With a tour that’s seen him collapse at one show, cancel another due to a blown voice and walk out on a third after a fan hit him with a thrown bottle, the girlfriend and I were just hoping he’d get through his Gibson Amphitheatre show in one piece. But if the former Smiths singer did betray a bit of his recent health woes with a seeming shortage of breath between songs and during a few missed verses, he made up for it in set list choices and sheer charisma. From the show’s opening moments, Moz sauntered about the stage like it was his living room, kicking things off with Smiths classic “This Charming Man” and cruising through a number of greatest hits from his old band: “How Soon Is Now,” “Ask” (the show’s highlight) and “Cemetry Gates,” among others. Full review + more photos after the jump.

His solo stuff went over well, too, but as a recent Smiths devotee, I couldn’t help wishing for Johnny Marr’s finesse over his current band’s grungier, brawny approach. Still, Los Angeles loves Morrissey, and the perpetually dour icon made an effort to reflect it back: “We’re doing our best to exude love,” he said, minutes after warning the crowd, “Welcome to Hell.” Heaven knows he’s miserable now, but for one night, Morrissey seemed happy to be in the city of angels.

Elsewhere: The L.A. Times has a fine review of the show, as well.