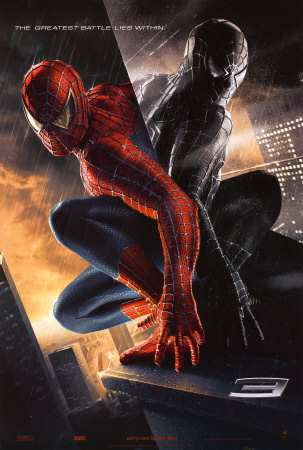 Editor’s Note: With today’s news that Sony is dumping director Sam Raimi and the universe of the first three Spider-Man films like so much horse shit in favor of a 2012 reboot, I’m unearthing my gushing May 2007 Daily Bruin review of Spider-Man 3. While it’s not a film without admittedly gaping flaws, me and my complete collection of ’90s Spidey comics still love it. #TeamRaimi!

“Spider-Man 3” accomplishes both of these things in spades, delivering on the promise of the first two films with the most complex, intriguing movie of the series. The Spider-Man movies have already seen the Marvel Comics hero battling two of his greatest villains – Dr. Octopus and the Green Goblin – and so, following in the tradition of “Return of the King” and “Return of the Jedi,” director Sam Raimi pulls out all the stops to bring the trilogy to an explosive climax. Clocking in at two hours and 20 minutes, it’s not much longer than its predecessors; however, the film is easily the most complicated of the Spider-Man movies, dividing screen time between battles along the New York skyline with three (count ’em!) new foes and Spider-Man’s personal life as ever-optimistic freelance photographer Peter Parker.

The film opens with Spider-Man swinging on a video screen in Times Square, having gained the adoration of New York – a hard-won victory for the oft-demonized hero. Peter (reprised by a pitch-perfect Tobey Maguire) is filled to bursting with happiness at having balanced his superhero career with a full college course load and a storybook romance with Mary Jane Watson (Kirsten Dunst), possibly the first and only time in 45 years of Spider-Man history that he’s finally got everything going right. With his irrepressible grin, Maguire carries this off perfectly – but it’s too good to last. As promised, this is the darkest of the Spider-Man films, finding Peter waging internal battles as well as overwhelming external ones.

Raimi smartly cuts the exposition as short as possible. Spider-Man’s black costume, an alien symbiote that helps lead the friendly neighborhood web-slinger to a state of out-of-character rage (witness his merciless battle with Sandman), arrives on an unexplained meteorite in the film’s opening minutes. While this and several plot points do leave a few threads loose for those who aren’t familiar with the comics, the film is such a thrill ride that audiences won’t mind suspending their disbelief. It moves so quickly between visceral, precise fight scenes and Peter’s strained relationship with Mary Jane (among other subplots) that it’s all you can do to just hold on to your hat.

Despite the film’s darker elements – without spoiling anything, heartbreak and death rear their ugly heads as never before in a Spider-Man movie – Raimi still reminds audiences why he’s directing it in the first place, playing up Spidey’s campier side via a scene-stealing cameo by Bruce Campbell as a French maitre d’ and an unbelievable Maguire dance sequence that pays homage to John Travolta in “Saturday Night Fever.” Yes, seriously.

What keeps “Spider-Man 3” from being another big-budget superhero film is its palpable humanity. All of the characters are believable, from sleazy but sympathetic rival photographer and villain-to-be Eddie Brock (Topher Grace, in a surprisingly deft performance) to the depressive, conflicted Mary Jane. While Grace is much more willowy than the comics’ imposing bodybuilder, he captures the homicidal insanity that makes Venom one of the most feared villains in the Spider-Man universe. And the story line of Harry Osborn (UCLA student James Franco), Peter’s best friend and the son of the Green Goblin, will both shock and satisfy even the most hardcore fans.

The only real gripe about the movie is that it’s not long enough: The shifts in tone from humor to dead seriousness are a little too jarring with the film’s quick pace, and Venom would be much more terrifying with a few more scenes before cutting to the cataclysmic final battle.

But more importantly, the movie does Spider-Man so well that having more of it would only be a good thing. There may be other Spider-Man films to come, but without Raimi at the helm and Maguire to embody Peter Parker’s everyman struggles, it’s hard to imagine anything matching the triumph of “Spider-Man 3.”

(This review originally appeared in the UCLA Daily Bruin)