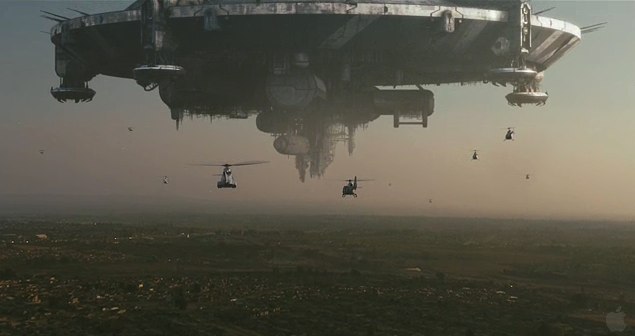 The big story of District 9 was its bargain-basement $30 million budget, a number that astounds once the movie starts playing. Its aliens are forcefully, disgustingly real; its cinematography is effortlessly propulsive (and tack-sharp, especially on Blu-ray) and Peter Jackson protegee and first-time director Neil Blomkapf’s decisions are largely on-point. (By contrast, an effort such as I Am Legend cost roughly $150 million for CGI vampires right out of a 1997 Castlevania game.) Once the action begins, about 20 minutes in, the movie turns into a blockbuster thrill ride that puts fat-wallet spenders to shame.

Where the film is less effective is in its efforts at sci-fi credibility. Essentially, District 9 is a metaphor for refugees and racism: a group of aliens arrive on Earth, mysteriously, with a ship that no longer functions and a savage, aimless population — and powerful weapons, a resource nearby humans rip from their hands for baubles. This, of course, is all set in Johannesburg, Africa, the scene of many such historical stains. Turning the tables on the standard sci-fi tropes of conquering invaders and hyper-intelligent civilizations is enough alone to justify the film, and it earns additional credit for avoiding, say, Avatar‘s hero cliches. Nevertheless, District 9‘s message — man’s inhumanity to man (or alien)! Corruption of government and corporations at the cost of the common good! — isn’t a new, or particularly deep one.

Not that it needs to be. But its intent is smudged a bit by some utterly ridiculous plot points. The aliens’ ship just runs out of gas? But manages to float miles above ground for 20 years? Over two decades of communication, Earth scientists aren’t able to assist with a fuel alternative or, you know, build them some better homes? The command module just falls off? A million-plus population with futuristic weapons are content to chomp cat food within the confines of a fenced-off refugee camp? Only one of the whole lot has human-level reason and intelligence? Some of these issues are addressed in the film’s exposition (in a brief voice-over I initially missed, which still doesn’t exactly explain what happened to the group’s leadership), but they still made the film’s ambling open act a bit of a struggle. Then a conflict is born, a chase begins and the film stops seeming more like District 6 1/2 — but in a genre built on suspending disbelief, it could’ve used more grounding in mythology before asking you buy into its morals.