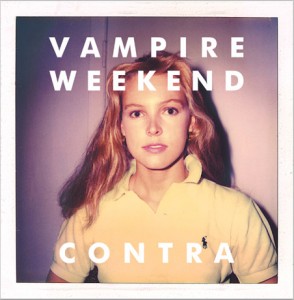 Vampire Weekend’s Contra is, essentially, what the Columbia-educated foursome previously offered on their fey, Africa-loving debut, only moreso. Fans of the first’s perky prep-pop will find much to dig into here; the album’s only real surprise is how grown-up it sounds in comparison to more recent cute overloaders like Girls and The Drums (a really horrendous, “Come On Eileen”-level band, by the way). The biggest change is the sudden sheen of en vogue electronic flourishes, but you’re better off looking to the far superior new Owen Pallett (formerly Final Fantasy) album for next week’s supply of those.

More importantly, though, it’s really good — and people who like Owl City are going to listen to this and have their minds blown a little bit, which is justification enough to blast it from your Jetta/fixed-gear all year.