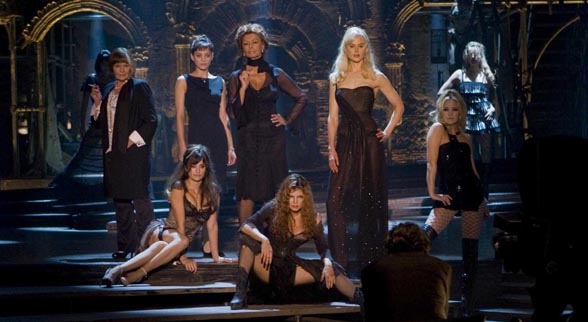 A list of the problems and missed opportunities of Nine would head quickly into double-digits, so I’ll be brief. The film finds its protagonist, irredeemable misanthrope and beloved director Guido Contini (Daniel Day-Lewis, excellent as always), at a crossroads: with his recent films flopping and middle age taking its toll, the passionate Italian turns to the women in his life to break through an onset of writer’s block. The narrative, of course, is little more than window dressing for the core of the film: Broadway-style production number after production number, each a glorified spotlight for an A-list actress (and, um, Fergie). In and of themselves, the set pieces aren’t bad, but in a movie that’s supposed to be a love letter to, well, movies — the effortless hipness of ’60s Italian cinema, the source material of Fellini’s 8 1/2 in particular — it makes little sense to play out Guido’s fantasies in the rafters of stage sets, even for a film based on a musical. Try as it might (and Nine is nothing if not a movie which does), the movie captures neither the visual cool nor the emotional impact and breezy romance of Fellini’s work. In better hands, there could’ve been art here, but Rob Marshall directs with all the energy and verve of a Johnny Cash biopic.

Among the film’s bright spots are Penelope Cruz, who has both the sexiest show-stopper and the funniest role as Guido’s mistress, and Marion Cotillard, who, no surprise, offers the finest vocals. In the singing department, Daniel Day-Lewis is as much a serious craftsman as ever: as leading men go in recent years, his work here betters Johnny Depp’s efforts in Sweeney Todd and Gerard Butler’s stumbles through The Phantom of the Opera. The songs’ main issue isn’t their performers — it’s that, as with Dreamgirls, they’re adequate at best, unnecessary at worst, a matter not assisted by repetitive choreography and sets that would translate better on the stage they originated from. Nine times the same sad song.