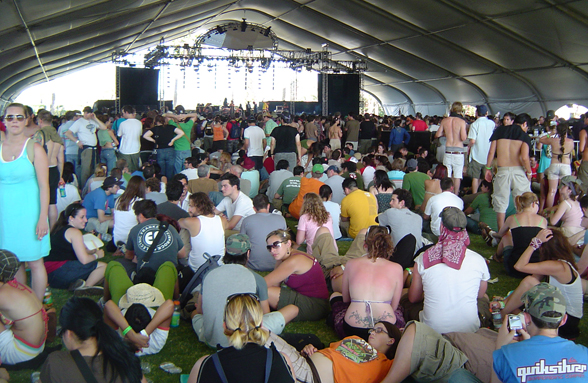 Coachella 2006 / All photos by David Greenwald

A girl called me a sell-out on Facebook over the weekend for buying a Coachella ticket. Said girl has joined a Facebook group (what else?) devoted to petitioning the April festival until it releases single-day passes for this year’s dates. Was she joking? Isn’t selling out ironic now? I have no idea. But it did get me thinking about festivals – and why Los Angeles and Southern California don’t have the options they used to.

In 2004, in advance of the last-ever L.A. installment of the All Tomorrow’s Parties Festival, I wrote a cover story for the UCLA Daily Bruin’s dB Magazine about the state of music festivals in America. (It was ATP’s third year in L.A.; no one anticipated it wouldn’t return.) At the time, now-institution Coachella was staking out a foothold as a yearly festival and Bonnaroo had started just two years earlier. Unlike the U.K.’s annual summer concerts, Glastonbury, etc., festivals in the U.S. at large were shaky at best following the demise of ’90s inventions Lollapalooza, Lilith Fair and the like.

That was back before Grizzly Bear was playing the Palladium and Vampire Weekend was topping the charts, and I was grateful and awestruck to have the chance to go to something like ATP – at which, over the course of two days, I saw Sufjan Stevens, the Walkmen, Modest Mouse, Lou Reed, The Shins, Stephen Malkmus, The Constantines and a ridiculous Flaming Lips headlining set. It couldn’t have been better – or, spread between only two stages with a mere few thousand in attendance, more intimate. Other newcomers, like Arthur Magazine’s short-lived but stellar Arthurfest (which featured Spoon, Sleater-Kinney, Cat Power and an Olivia Tremor Control reunion), struck a similar balance between arena excess and indie authenticity. 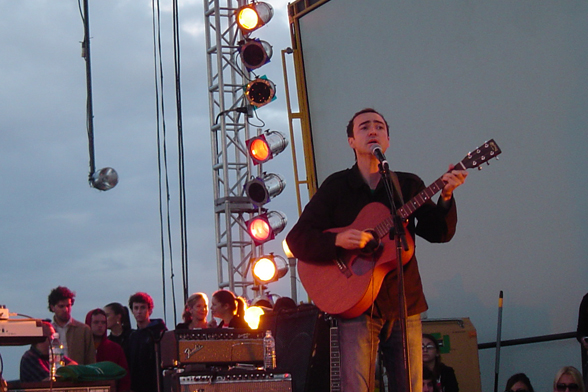 But things changed, and sprawling, Coachella-style multi-day events sprung up around the country over the last decade as the decline in record sales increased the importance of making a touring mark and infinite iTunes playlists steered listeners toward the varied styles and one-stop-shopping of the festival scene. Indie rock blew up, the cast of The Hills descended like locusts on Indio and queen-sized artists from Madonna to Prince to Paul McCartney (and even Jack Johnson) made their way onto the bill. If Goldenvoice could make it happen, they’d probably be happy to give U2 a headlining gig.

Now, that mainstream success has come with a price – a $310 price, to be exact, after Ticketmaster fees. After 2006 (my first trip to Coachella), the festival added a third day, diluting the quality of its acts (at least to this blogger) accordingly. With three days in the desert to suffer through and one falling on a work or school day for most, single-day tickets have logically been a big portion of Coachella’s sales in recent years – some 20%, according to the Los Angeles Times. This year, Coachella cut off single-day tickets, raising the cost of attendance substantially. Coachella’s people’s explanation had to do with traffic, hotels and the general quality of life surrounding the fest, which is all well and good, as is the excellent news that this year’s fest will finally allow ins and outs – which means, if you bring a cooler, you can probably save a single-day ticket’s worth of money on booze and food alone.

Nevertheless, people are up in arms about this and – because actually doing something about it would be really hard – have started the aforementioned Facebook group in protest. I’m sure this is what our parents envisioned for their offspring for when they were marching against Vietnam. I think a boycott would be a great idea, actually – I hope as many people as possible skip this year so I can be front row for Dirty Projectors. More seriously, there is a real issue here: the best day of this year’s festival, which I am attending all of and even paying for, for the record, is Sunday, with Pavement, Thom Yorke, Gorillaz, Sly and the Family Stone and more. If you’re an indie rock fan of discriminating taste, Friday and Saturday offer three or four bands each really worth your attention, which doesn’t much justify the $100-a-day price tag (plus the cost of camping, hotels, etc.). I think the outcry over single-day passes wouldn’t ring so loudly if more of the weekend was worth the cost. That said, this protest is like complaining Costco only sells items in bulk.

Here’s the thing about music festivals: they’re more about festivities than the music. If you have a checklist of bands to see outside of a single stage (or even on one), you’re going to have a shitty time. There are too many people, too many technical difficulties, too little time in the sets and far too much heat to have anything approaching the kind of visceral hour you’ll have during any given night at the Troubadour or Spaceland or the Smell or Largo or any small club in our fair city. Not to mention the five-plus hours you’ll spend in the car that day on the way to Indio and back.  If seeing your favorite bands is your priority, single-day dudes and dudettes, then you should go see them one at a time, where your hard-earned dollars will go more directly toward their livelihood and your aural enjoyment. Going to a music festival like Coachella is about the experience: three days of heatstroke and hedonism in the desert, surrounded by friends and soundtracked by great tunes, even if they’re played from a football field of people away. Coachella’s decision to slice the single-day tickets, in this respect, will actually make the festival better: there will be no flood of Rage Against the Machine muscleheads flooding in and harshing our post-Grizzly Bear mellows, for instance. Is it a lot of money? For this year’s particular lineup, yeah, but for the experience and a trip out of town, I think it’s worth loosening one’s wallet – and obviously no one is forcing the protestors to fork the money over.

The larger problem here is that Coachella has too little competition. It began as more of a hip-hop/dance/beat-oriented festival than it ever did an indie rock one — its best, or at least most guitar-friendly line-ups were from 2004-2006, as the genre emerged into the mainstream but before the explosion of acts like Wavves – flash-in-the-pan bands without touring experience that continue to water down the market. We don’t need single-day tickets to Coachella. We need an alternative: a new Arthurfest or a new All Tomorrow’s Parties or a Pitchfork Fest West Coast. LA Weekly’s Detour festival and Sunset Junction have tried to fill the void and so far, fallen short. Fuck Yeah Fest has potential, but its past acts have been largely fringe noisemakers. Since Arthurfest in 2005, really, a single great, mid-size indie rock festival with bands of serious quality has been absent from Southern California. There’s a niche to be filled here, out in Real Life; maybe a few of Coachella’s Internet complainers can be the next to muster the energy to try.