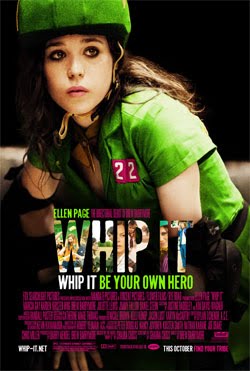 Whip It, Drew Barrymore’s directorial debut and passion project, sure feels like one. The story of a small-town girl who rebels against her parents and her quirky-but-suffocating environment by joining a rambunctious, tattooed roller derby team, the film tries to be too much: a coming-of-age drama, a sports comedy, a girl power manifesto, An Education in middle America. Without hitting any of those genres out of the park, it rounds the bases exuberantly enough to make up the difference. Plus, it was nice to see Ellen Page being endearing without having to talk into a burger phone. The biggest winner here, though, is the soundtrack, which features Jens Lekman, Badly Drawn Boy, Radiohead and Little Joy, among others. Just don’t keep your ears peeled for Devo.