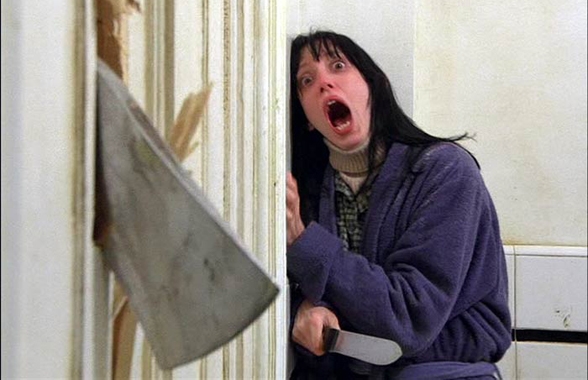 The deeper I burrow myself into the Kubrick oeuvre, the harder it seems to look at the rest of film — the entire art form! — the same way again. The Shining might be the best movie I’ve ever seen; it’s certainly the most impressive experience I’ve had in front of a screen for 90+ minutes in at least two years. Some brief thoughts: Jesus Christ, the art direction! Shades of red (well, one purposeful shade: blood-red) permeate the film, from the hotel lobby’s pillars to Jack’s (Jack Nicholson) jacket. It’s aided, of course, by bone-white and coffin-brown. The cinematography: slow and deliberate, like a hovering ghost — always moving over your shoulder, wide-angled but not quite omniscient. One can see where Sam Raimi’s rush-camera shots for The Evil Dead, released just a year later, originated. The wide lenses turn the hotel’s long hallways and spacious rooms as claustrophobic as a janitor’s closet. The music: half the raw dread of dissonant strings and white noise, the other the scare-baiting of shrieks of doomed melody. And then the acting, my God: Jack Nicholson opens the movie with the kind of manic delight that makes you wonder if he’s just fucking with you (a style notably repurposed, particularly in the Spider-Man trilogy, by James Franco) and then, as he turns monstrous, makes you realize he’s not. Frame for frame, The Shining is on every level such a tour de force that it makes even the most labored-over competitor seem like an afternoon’s scribblings. All that, and scarier than hell.