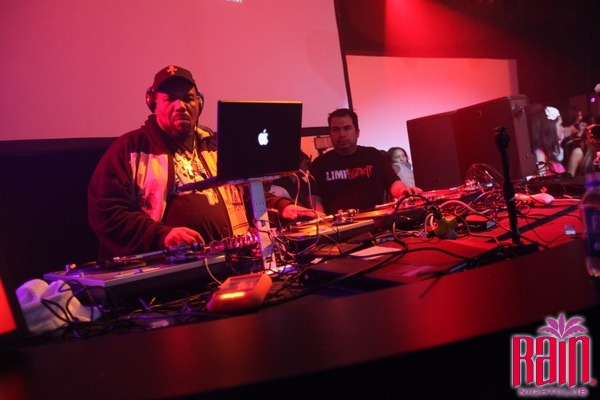 Editor’s note: L.A. beat junkie Phil Merkow may have the most interesting taste of any music fan I know — and the best ears. He’ll be sending back Rawkblog dispatches from the murky underground of electronic/experimental/DJ culture when the mood strikes him.

The Palms Casino Resort’s RAIN Nightclub is the new home for Los Angeles mash-up king DJ Z-Trip’s “Revolution A Party For The People”. While Z was out of town on the 12th, about to endure a snowboarding accident, he called in some heavy-hitting pals to fill in.

Boxes, booths and stage wings, RAIN seems to be built to give anyone willing to part ways with their paycheck the chance to play VIP for the night. A groovin’ grandpa seemed to be the benefactor of stage right — yes, for a price, you can party in your own wing of the actual stage. The venue is filled with unique vantage points if you are adventurous enough to work your way through the meandering staircases and balcony ways. A pyro-teched out chandelier and scantily clad go-go dancers set the venue apart from L.A. clubs I have survived.

All-star DJ Jazzy Jeff kicked off the night with his own slightly warped take on top 40 staples. Rihanna’s “Live Your Life” seemed to resonate with the crowd as if they had just discovered the song last week. Jeff was accompanied by a great hype man who showed a deep understanding of the difference between highlighting and distracting (an often fine line). Jeff didn’t stray too far from the sort of safe bet Friday night club staples one could hear at any given turntable-ready venue, and too few scratchy flourishes may have left any beat junkies in the crowd itching for a bit more, but you would have been hard-pressed to find any folded arms during his set.

Veterans of the turntabilist movement long ago made the leap from vinyl to Serato controllers, but it was still a bit of a shock to realize Afrika Bambatata, frequently credited with being an originator of hip-hop, would be rocking a Mac. Then again, technology would soon become the least of my worries. Afrika seemed less than enthused to be present and his indifference didn’t do much to hold the slowly but steadily thinning crowd. Something about his classic jam “Planet Rock” mashed with a “Stand By Me” a capella didn’t quite seem hot off the press, and considering Jeff’s pleasing but predictable set, kept the evening from anything approaching risk. Afrika’s overly zealous hype man, who seemed to be getting a 2 second advanced feed of the music, was the last straw for me.

Up on the 55th Floor at Ghost Bar, DJ Pauly D (of “Jersey Shore” fame) played to a smaller but feverish crowd. Stepping out of the elevator, it seemed there was barely a square inch of real estate left to fist pump upon. This was actually an optical illusion caused by a train wreck’s worth of women, cameras in hand, who had jammed themselves to the front of the otherwise open bar. Pauly’s set was a fast-paced down and dirty mix of hits (Daft Punk rework) and misses (Papa Roach edit?) — much like his inexplicably watchable show.

While Z-Trip’s presence at RAIN may be relatively new, and though he was able to snare the names to fill his marquee during his night off, his absence was felt deeper than a Nicholas Sparks heroine. Let’s hope he knows he’s got plenty of his own welcome to wear out before he takes his next break.
–Phil Merkow