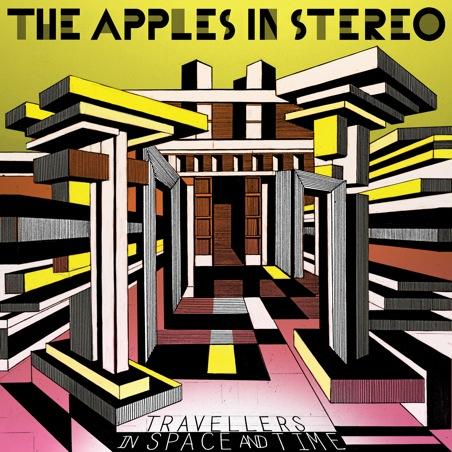 As the Elephant Six Collective goes, I’ve always turned my ears toward Neutral Milk Hotel, the Olivia Tremor Control, of Montreal and latecomers Beulah – not, in other words, to the Apples in Stereo. So I can’t tell you if the longtime band’s latest album, Travellers In Space and Time goes in new directions or offers fresh surprises — though by the last track, I was personally shocked there’d been no interstellar rollerskating anthems.

Let me explain. Like their pals in of Montreal recently, the Apples have turned their attention to the groove-oriented glam-funk-disco of the ‘70s, though while Kevin Barnes borrows from Bowie, Travellers turns to ELO. The album has the most flagrant vocoder use I’ve heard outside “Mr. Blue Sky” (or a Jon Brion concert, for that matter) and Flaming Lips-esque lyrics to match, with outer space and the dance floor battling it out for thematic dominance. It’s all pretty Xanadu — and thus roller-disco ripe – but the hooks are huge and the band plays with a twee-pop earnest ecstasy that’s hard to deny. After all, after two decades of ignorance, it’s the disc that’s got me paying attention. MP3 + stream after the jump.

(Travellers In Space and Time is out now