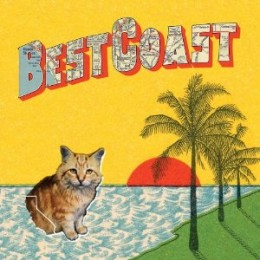 Funny that two of 2010’s most notable female-fronted releases, Joanna Newsom’s Have One On Me and Best Coast’s Crazy For You, are all about guys. Newsom’s collection spends three discs and two hours on Serious Poetry and image-laden empowerment; Crazy For You is 30 minutes of BlackBerry-typed middle-school Tumblr posts. Newsom’s album is considered, nuanced, elegant; Best Coast’s is fast and loud.

But I have to give Crazy For You credit: the band was so sloppy and amateurish at SXSW that I skipped half the set and couldn’t be bothered to blog about them. The album is a different beast entirely. It sounds professional, even skillful, in the hands of producer Lewis Pesacov (Fool’s Gold, Foreign Born). It’s largely in the vein of the recent round-up of ’60s-via-’90s jangled-up girl-group revivalism, but when the choruses hit on tracks like “Boyfriend” or “I Want To,” the guitars bite with serious grunge-era teeth and the harmonies — a surreal blend of the Supremes and My Bloody Valentine — deserve an album of their own.

There’s been a lot of talk about the lyrics, and yeah, they mostly suck: they’re not as aggravating as, say, Wavves’ numbskull self-hatred, but in many ways the record plays out as a Mel Gibson fantasy: a girl wholly enveloped in feelings of misogynist worthlessness, wishing her cat could talk and pining for some certainly awful guy (life imitates art: Beth’s dating Wavves.). The songs are too straight-ahead to demand Newsom-level lyrical intricacy, but Best Coast’s antecedents — PJ Harvey, Hole, Nirvana — all managed to take their despair beyond See Spot Run. Given Best Coast’s Twitter pop hatred, I can’t imagine Beth’s a Taylor Swift fan, but she’d do well to learn from Fearless‘ sincere, capable relationship narratives. (Also, she should date a Jonas brother next.)

At 30 minutes, Crazy For You feels over-extended — the beefy production and rote rhythms start getting exhausting two-thirds in — but for a surprising portion of its run-time, the album sounds flat-out great. If you want a side of self-respect with your 2010 girl-punk, though, stick with Paramore.