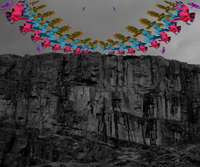 The world needs more alt-country with doom on its shoulders. Athens, Georgia’s Futurebirds’ “Battle for Rome” is music for the apocalypse set in 1855, the gold rush drying to dust and fires on the horizon. “The sun ain’t gonna save my life,” Thomas Johnson intones with Buffalo Springfield-era Neil Young dread. Electric guitars tremble, pedal steel soars and the band smolders with the kind of desperation I wish Midlake had managed to capture on this year’s The Courage of Others. Fight the good fight.

(Hampton’s Lullaby is due July 27 on Autumn Tone)