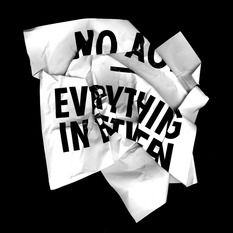 They say you have your whole life to make your first album. That hasn’t changed, but no one makes first albums anymore. Bands make MySpace demos and Bandcamp EPs and limited edition tapes and Soundcloud embeds, half-ideas sketched on a laptop in hopes of impressing the Internet. Like Mad Men‘s Pete Campbell, they want what they want, when they want it. This isn’t the Internet’s fault: The Internet is the vaccuum. The bands, ceaselessly filling it with an endless flood of unready music, are the ones who abhor it.

So the bands who’re most interesting in 2010 are not the dozens entering it weak and screaming like so many premature babies; they’re the ones who know what they’re doing and haven’t grown boring doing it yet. Dirty Projectors. Radio Dept. Deerhunter. There are more. Now, No Age joins their ranks. Everything In Between is the L.A. band’s third album overall and second full-length proper (Their debut, Weirdo Rippers, was a compilation.) Like all great mid-period works, it sounds fucking phenomenal: Like Mount Vesuvius or the asteroid that killed the dinosaurs, they have turned the tools of their art — drums, electric guitars, pedals, amplifiers, microphones, four walls — into something inexorable and apocalyptic. While not the great leap of My Bloody Valentine or The Jesus and Mary Chain (or, for that matter, Jimi Hendrix), Everything In Between is a sonic step forward, a new way of hearing rock ‘n’ roll music, and for that reason alone, it demands to be heard. (And heard on headphones that cost more than your last night at the bar. If you don’t have them, get them. Shit’s embarrassing.)

But the great mid-period albums — Yankee Hotel Foxtrot, Alligator and the like — marry sonics with substance, and Everything In Between contains the band’s most tightly edited, best written songs. Like Deerhunter, they’ve moved slightly toward pop, just enough to shift them from the fringes toward the frontier. There’s plenty of ambience here, but it drips into a jar of elusive, intriguing hooks. “Fever Dreaming” offers a feedback stab violent enough to carve itself chorus status, while “Depletion,” were its distortion knobs turned down, is pure California skate-punk. It’s that tug-of-war, between the three-chord bone-headedness of Cali punk and the art-noise stratospheres the band seems so intent on exploring, that makes Everything In Between so essential. While bands like Wavves flounder toward pre-school, No Age went to college. They learned what they wanted to say and how to say it. The least we can do is listen.