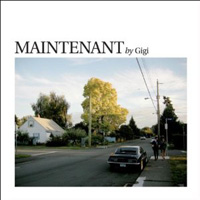 With its rotating cast of vocalists and Malt Shop Memories meets indie-pop bent, if I didn’t know better, I’d assume Gigi’s Maintanent was a new Saturday Looks Good To Me album (or one by the Magnetic Fields, for that matter). Nevertheless, Gigi – a project by Nick Krgovich (P:ano, No Kids) and Colin Stewart more than a proper band – has crafted a worthy addition to the genre.

Though the singers change from song to song, all share a uniform devotion to the sincere style of the girl group era, with the music wrapped up in horns and strings and sung with an unpolished exuberance. Phil Spector would’ve whipped out a revolver over some of these performances, but they’re never sloppy – just loose enough. The songs themselves are what you’d expect – snappy rhythms, unrequited romance and big choruses broadened by a touch of reverb. There’s no obvious “Be My Baby” here, but the album, which hits its stride on its second side, is a stand-out overview.

‘50s and ‘60s early-rock source material may be the stuff of critical drooling these days, but Gigi’s most notable moments come when the group updates its influences a bit. Take “The Marquee,” a sexy song that slinks with the jazzy cool of Bacharach and David, down to that songwriting team’s trademark flugelhorns, or “Dreams of Romance” – a Latin-tinged track with wounded, Devendra Banhart-like vocals from Parenthical Girls’ Zac Pennington.

On the more sock-hop ready stuff, the fun is hearing indie singers out of their element – the typically (and wonderfully, I might add) downcast Rose Melberg is as bright as a day at the beach on “Alone at the Pier,” and K Records standby Mirah does her best Diana Ross on “Won’t Someone Tell Me.” I only wish they’d reeled in Jens Lekman for a couple of these — then Gigi would really, ahem, drink your milkshake.