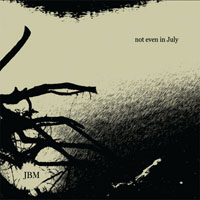 At the time of this writing (a few weeks back, at this point–Ed.), The Tallest Man on Earth is the Hype Machine’s most-blogged artist. If you’d like to hear a folk singer who doesn’t sound like a cartoon character, however, you — and the blogosphere, which failed to alert me when this record dropped a few months ago — should look up JBM. His debut, Not Even in July, is a somber collection lead by minor-key pianos and lingering lead guitars, the kind of stuff Michigan-era Sufjan Stevens (or the still-great White Ladder-era David Gray) once did. The album’s appeal is the forest, not the trees: the beauty of the way the recording (done in a church), the soft emotion of his voice and the slow release of the gently paced arrangements ease together. It’s a collection that sinks in, not one that sticks out — there’s no Bon Iver bleating or Tallest Man yowling, or, admittedly, hooks that’ll grab you on the first listen or two. Put it on and watch the leaves change color.