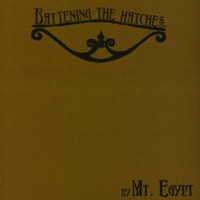 Mt. Egypt isn’t a mountain, or a country: It’s a man and his mourning. Travis Graves is the frontman of the mostly solo project, which on this record gets by on little more than his singing and strumming. Graves sings with the ragged glory of Neil Young; much of Battening the Hatches finds his vocals straining like Shakey in his Buffalo Springfield days. The songs are as sad or sadder than Young’s, almost pathetically so: “He better be good to you / I will never have the chance to try,” he sings in the title track.

Most of the tracks, adorned simply with piano or guitar and occasional backing vocals, are spontaneous-seeming ruminations on depression: Seeing Will Oldham’s darkness and diving into it. Graves’ sense of failure is profound. Even “New Song,” the album’s closest thing to a rock song and bearer of its most optimistic title, finds him praying “that I live a little bit longer.” The music and production has a ramshackle, broken-down quality that echoes the lyrical angst and, in 2003, would’ve placed the album alongside similar efforts by Oldham and Bright Eyes. If you’ve got loneliness rumbling, Battening the Hatches can help weather the storm.