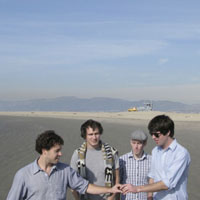 “The tide comes in, the tide goes out,” singer Matt Lamkin laments on The Soft Pack’s “Tides of Time.” While the Strokes’ Julian Casablancas turned his ennui toward urban life (read: amount of sex had or not had on any given evening) on his band’s debut, Lamkin’s otherwise like-minded act seems drawn closer to more serious matters. “You gotta answer to yourself,” he sings in, of course, “Answer To Yourself,” and throughout, this is music about that rarest of rock subjects: responsibility. Or at least appreciation of one’s time on Earth: the tide comes in, the tide goes out and no chill wave lasts forever. Limited as their lives may be, the Soft Pack’s music, a seven-grain answer to the Strokes’ sourdough sound, is built to last, paced at the speed of punk and as indebted to Mission of Burma as it is (on songs such as “More or Less”) to the Church. “Gimme indie rock!” 2010 shamefully thinks to itself, and lo, the Soft Pack provides.

(The Soft Pack is out now on Kemado Records)