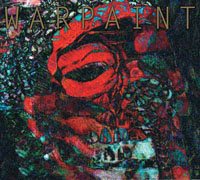 After my lengthy screed about Warpaint and sexism, this belated review should probably talk about how hot this record is. I thought it was, at first, but further listens reveal The Fool is closer to a suspense film — a revenge thriller that ends with a twist. Take “Undertow,” the album’s lead single and my favorite song of the year: “Your brown eyes are my blue skies,” it begins, arguably 2010’s sweetest line to a lover — but things go south quickly. “You breathe in the deepest part of the water,” the song continues. “What’s a matter / you hurt yourself? / open your eyes and there was someone else.” That someone, of course, is our protagonist, keeping a fearsome hold on a would-be runaway. There’s sex in there, yes, but hiding behind obsession. “Baby,” an acoustic track that abandons the album’s shadowy post-punk, plays like a murder ballad: the line “Don’t you call anybody else baby / because I’m your baby still,” feels like a threat, not a lament.

So The Fool is about holding onto something — or the memories of something. As the album comes to a close, “Majesty” suddenly goes past tense: “I adored your face,” then: “I wanted you by my side / the perfect match,” a line you can imagine arriving as flames engulf the house and a killer’s finally revealed. “You could’ve been my king.” The album’s title, then, becomes clear. But perhaps our heroine’s paranoid fever-dreaming is just that: final track “Lissie’s Heart Murmur” puts her would-be majesty in the protagonist role: “I went looking, went searching under the water / sinking and searching / [??] pulled me under,” a callback to “Undertow” and a pursuit that seems suddenly less one-sided. (I can’t tell, thanks to a vocal effect, if that missing word’s a he, a she or something else.) Then again, perhaps the hunt is our protagonist trawling for a body. Several of Warpaint’s members take on lead vocal duties throughout the album, further muddying the narrative waters.

It’s dark, ambiguous stuff, a narrative that rewards attention. It’s enveloped by music as equally menacing and mystifying: distressed vocals are blurred by echoes and reverb-filtered harmonies, while guitar melodies peel out with sinister leisure. The songs are just unfocused and unpredictable enough, a gorgeous building demolished and only halfway rebuilt. (Producer Tom Biller, I’m sure, deserves credit for the widescreen sonics.) Drummer Stella Mozgawa is the band’s anchor, her steady hits keeping the the untethered emotions of songs such as “Undertow” from leaving the rails entirely. It’s not quite pop; it’s not quite anything, completely. Except excellent.

(The Fool is out now on Rough Trade)