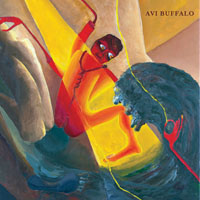 I wasn’t paying attention for Avi Buffalo’s early Los Angeles history — the teenage band has plenty already — but it’s clear that the band members are students of their city’s legacy. Their debut album arrives on Sub Pop, the same label as L.A. twee-psych-country heroes the Beachwood Sparks, and the Sparks’ influence and the songwriter traditions of Gram Parsons and the Byrds are felt joyfully across its 45 minutes.

(Avi Buffalo is out now on Sub Pop)