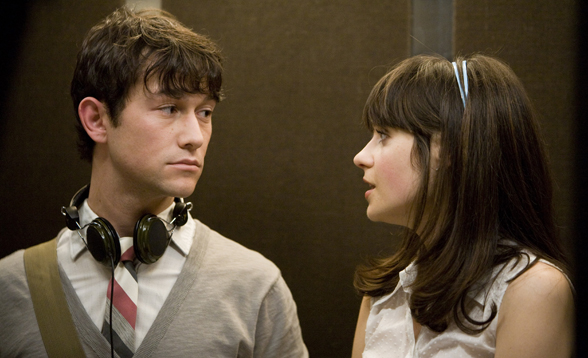 Editor’s note: I watched (500) Days of Summer again recently and felt compelled to gush about it on Twitter, where I found that not everybody loves quite as much as I do — especially Rawkblog pal Sarah Spy. 1,000 words later, I’m still not sure who’s right. Get yr debate on with us after the jump.

Dave Rawkblog: There’s a scene in (500) Days of Summer where Tom (Joseph Gordon-Levitt) counts the ways in which he loves the titular heroine: Her smile. Her birthmark. Her knees. Her laugh. It goes on. Later in the film, of course, he’s come to hate them all. It’s these dueling perspectives that seem to be on either side of the film’s reception: either you love it for its heartfelt, clever, sometimes-twee take on modern love, or you hate it for the very same reasons — and you can’t imagine feeling any other way.

After an unhealthy number of viewings, I come down firmly for the former. There’s nothing about the film I don’t love, from its inviting cinematography to its lead actors’ endearing performances to its blend of realism and cartoonish quirk in the telling of a love story that doesn’t quite color inside the lines. As Joanna Newsom might say, why the long face, Sarah Spy?

Sarah Spy: I’m glad you brought up Joanna Newsom because I can’t stand her either.

I’ll admit upfront that my own past romantic experiences are part of the reason this movie irritated me from start to finish. I’m not bitter or anti-twee. It’s just, to me, there’s nothing enjoyable about watching some naive schmuck ride out his over-romanticization of the first OK-looking girl he’s ever encountered with indie opinions and a little sass-back.

I’ve been in her shoes, more than a couple times. Alright-looking bored girl reveals she’s heard of some semi-niche band he digs, floors him with some not-actually-impressive knowledge (perhaps she even dislikes the band he takes pride in loving), and suddenly, against her will, she’s unfairly transformed into the magically indie-aware star of his wet dreams. Throw in a little relationship resistance, and there she goes, up on that already-teetering pedestal, watching her every quirk exploited. Inevitably, in 500 days or so, boy realizes that regularly-trimmed bangs and a couple of snarky opinions does not a goddess make. In fact, girl is actually kind of rude.

All the gorgeous cinematography in the world can’t outweigh that tired storyline for me. And regarding the fine acting you mention — can we next address the casting? Do you think every time Zooey picks up the phone, she hears “Hi Zooey Deschanel, we’re looking for someone to play Zooey Deschanel and thought you’d be PERFECT”?

Dave Rawkblog: I guess a lot of the movie’s likability hinges on how you feel about Zooey/Summer. To me, the film’s High Fidelity touches are just that — touches. Tom’s kid sister punctures the balloon of Summer liking the Smiths and J.D. Salinger pretty early in the film; if they spend a lot of time talking about Ringo Starr or going to the movies, this is what people who like stuff do! On the subject of Summer-as-idealized-manic-pixie-dream-girl, the movie may be unfair to her, but it’s from Tom’s perspective and this is how plenty of guys — particularly (presumably) inexperienced, Smiths-listening 20-somethings like Tom — relate to women. The movie’s conclusion hinges on Tom realizing that he can’t impose his expectations on her, and that adult relationships are about accepting people as they actually are, not how they’re fantasized to be, a place he can’t arrive to if he doesn’t begin by considering her as a unicorn. It’s a lesson he learns later in life than many, maybe, but one that remains an essential destination for guys like Tom.

Regarding the casting, frankly, as far as this movie goes, I’m completely sold on Zooey. There are reasons we have archtypes: she fits flawlessly into the beautiful but not intimidatingly glam, desirable but not overtly sexual, quirky but not weird canon populated by actresses from Audrey Hepburn to Natalie Portman. Even her voice is magnetic. This is a purely subjective response from a shy indie kid — if you’re not attracted to her in this role, well, no amount of discussion will tilt your feelings.

It may initially seem as if the unrealistic expectations placed on her pale shoulders make her the film’s ghoul, which I don’t agree with — and I don’t think the film does, either. On Tom’s blind date, it becomes clear that he has no rational reasons to be angry with her; the failure of the relationship is as much his fault as hers. Love is a gamble — I’m glad Tom takes the chance, and sympathize with him when Summer’s feelings don’t rise to match his. In the bar scene, even before Investment Banker Bro approaches Summer, she looks unhappy. This is a few months into their relationship, and they’re already set in their ways — going to the movies, going to the same bars as Tom idles away his life at a job he doesn’t care about. Summer came to New York for a change — she wants something more. So it’s not entirely shocking, or unfounded, when she leaves him. If she’s at all evil, it’s in her inability to communicate what she wants, a problem of Tom’s, as well. Here’s where the indie references become heartbreaking: you can relate on so many levels (The Smiths, c’mon) and still find each other inscrutable.

What’s exciting about the film (beyond its clever stylistic elements) is Tom’s emotional journey, from outsize first impressions to early-love bliss to the sub-basement lows of the break-up. Though (500) Days plays some of its moments as tongue-in-cheek, their relationship feels very real (if, yes, fairly unhealthy) to me.

Just kidding, and yeah yeah, The Smiths. I agree the soundtrack’s filled with logical choices, and I don’t disagree that Zooey’s casting was logical, too. But that’s also my point. Zooey’s obviousness is so unspecial and repetitive that it distracts from so many highlights you mentioned. I can’t pay attention enough to evaluate her performance. (Seriously please time machine me back to “All the Real Girls,” before she formalized the pigeonhole she’d never grow past.)

Anyway, you’re right that not all stories require surprises. Knowing the ending early-on didn’t bother me. And normally, I appreciate true-to-life tales, too. But this particular real-life phenomenon can’t entertain when every character is seriously unlikable! “Perfect execution” only makes it worse. Nobody was worth rooting for. Summer deserved her lame banker bro the same way her and Tom deserved to sled down an Ethan Frome-style hill into a tree.

Dave Rawkblog: Tom is worth rooting for! But I saw a lot of myself, good things and bad, in the character. This all goes to show the personal baggage we bring into a film, or any piece of art — like Tom, we can’t help but see it through the lens of our own expectations. In this case, though, I know (500) Days of Summer won’t ever walk out on me over pancakes.