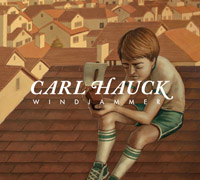 Getting To The Point Dept.: You need to hear Carl Hauck’s Windjammer. I’ll never post anything I don’t seriously like on Rawkblog, but this is a special record, a collection of tender country-tinged folk that draws on Michigan-era sufjan Stevens and Heartbreaker/Gold-era Ryan Adams with equal adeptness. The northern Illinois musician sings with Stevens’ hushed somberness and a touch of Southern twang, a voice that pairs flawlessly with fingerpicked acoustic guitars. Given that the album’s filled end-to-end with them, that’s a good thing, but the ballad-driven set is at its best when Hauck’s most insistent: at his most Adams-y alongside slow-burning electric guitars on “Coming Away” or in the company of horns on “Martial Riesling.”

His arrangements are thoughtful and minimally laid, a saxophone here, a lead guitar there, and always so rich an addition that one can’t help but wonder why Hauck didn’t opt for more of a fuller sound throughout. Still, even at its most spartan, Windjammer offers fine songwriting and performances delivered with the clarity of a new morning.

Stream the album in full and buy it after the jump.