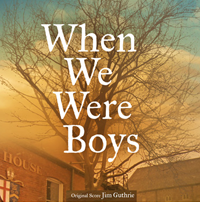 The 2010-released When We Were Boys soundtrack is an extremely nice reminder that Jim Guthrie remains the understated, Canadian answer to Sufjan Stevens’ often indulgent flights of fancy. It’s mostly instrumental, but does offer some new vocal work — “If Chairs Were Bears” is miles better than the Islands-bro-damaged pop of 2008’s Human Highway release, as is the upbeat “Trouble” and the early Death Cab gloom of “Sexy Drummer.”

Guthrie’s best-of-decade-caliber Now, More Than Ever was reissued on vinyl last year, though I believe this release marks his first solo pop efforts since. (The soundtrack also includes cuts from Rock Plaza Central and Tomboyfriend.) Stream the soundtrack in full and buy it after the jump.