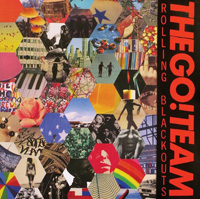 I passed on the Go! Team during the first go-round in 2004. Likewise, Rolling Blackouts, their (long-awaited?) comeback album, has more skippers than Gilligan’s Island: it’s all overstuffed bloat, ADD pop ideas in a cheerleading competition instead of in harmony. “Buy Nothing Day,” the set’s one unfuckwithable jam, is almost pulled apart by the same inclinations but has just enough cohesion to allow a jubilant Bethany Cosentino-sung power-pop core to shine through. At times, it sounds almost like a lost Figure 8-era Elliott Smith scorcher. It’s great. Listen to it. There’s one more good song on this album somewhere but I can’t remember which one and God forbid I have to ever listen to any of the other tracks again, so I guess we’ll never know.

Buy Nothing Day by threeminutesthirtyseconds

(Rolling Blackouts is out Jan. 31 on Memphis Industries)