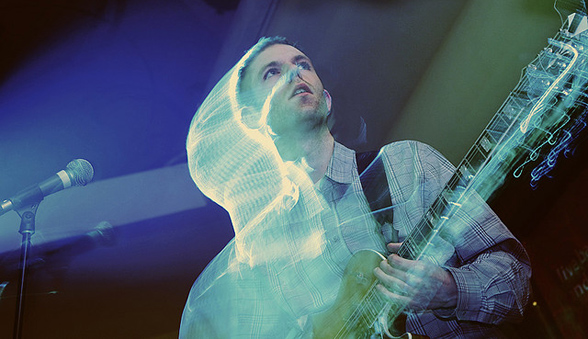 Sweden’s the Radio Dept. are an enigmatic band — and they like it that way. Despite a fervent Internet fan base and routine Hype Machine chart domination, the rough-edged dream-pop group doesn’t have a website and spent the three years leading up to 2010 album of the year Clinging to a Scheme in the studio keeping quiet, releasing the occasional single as planned album release dates came and went. This year, though, the Radio Dept. are ready to make some noise, releasing a two-disc career overview singles collection, playing Los Angeles for the first time in their 10-year history tonight and bringing their synthesizer assault to the Coachella Music Festival in April. I caught up with the band’s Johan Duncanson and Martin Larsson on Skype to discuss their marathon recording process, why it’s good to stay mysterious and collaborating with countryman Jens Lekman.

David Greenwald: You were announced for Coachella recently, that’s great news. Do you know much about the festival?
Martin Larsson: I’m not familiar with Coachella at all.
Johan Duncanson: Our sound guy was there last year but before that I didn’t know about the festival. It’s supposed to be quite big, isn’t it.
DG: It’s huge, a couple hundred thousand people.
[Both laugh]
JD: That’s amazing.

DG: I tried to look up your last show in L.A. and couldn’t find one. Have you ever played here?
ML: Not in Los Angeles. San Francisco in 2003.

DG: Anything special in L.A. or Southern California you want to see beside the beach?
JD: If you watched Swedish television, you kind of grew up with American films, so we’ve been to L.A. many, many times but just not in person. So yeah, I’m sure there [are] lots of things for us to see when we get there.

DG: You’re pretty busy at the moment, with the singles collection and the tour. Is there a reason we haven’t seen more of you on the road in the last few years?
ML: Well, it’s expensive to tour.
JD: Yeah, you tend to lose money by touring if you’re not a huge band, so we haven’t really been able to afford it.

DG: As far as releases go, you’ve done a lot of yours as EPs and singles instead of albums. Do you prefer to work in smaller batches?
ML: I think it’s easier to work on an EP. It’s more fun.
JD: And it’s fun to release records as well, and you can make so many more records if you release singles and EPs than if you make albums. It’s nice to give every record its own identity in a way, and it’s easier to keep that identity intact if you make a shorter piece of music.

DG: There are songs like “The City Limit” that aren’t on the singles set. Are those songs ever going to be reissued, or are you going to leave them as rarities?
JD: No, there’s going to be a reissue of the Pulling Our Weight EP and This Past Week as well. Maybe one or two of the others.

DG: You’ve been very generous with your fans as far as downloads on your website, live recordings -– what has it been like to watch a community grow there?
ML: We can’t take credit for that because it’s not our site, it’s a fan site, actually. They’re the generous ones. We’re not into Internet at all. It’s not our thing. We only record music.
JD: I think we’ve been too lazy to create our own website, because we’ve been talking about it for as long as the band has existed, since 2001. But so far we just… the music has had its priority, I guess, and so everything else has been left behind.

DG: I didn’t realize that site was a fan site.
ML: There’s not too many people that know that.
JD: Everyone thinks that we’re behind it.
ML: It’s been growing quite a bit and it’s good that it exists, but it’s kind of a problem that everyone thinks that it’s us. Other than that, it’s nice to have your own fan site.

DG: So you’re I take it you’re not into the whole Facebook, Twitter social networking thing.
ML: We thought we had to, we have a Facebook site and we have a myspace.
JD: But we don’t use them, really. Every band nowadays is so available all the time. What happened to mysterious? We don’t want to be everywhere all the time, we want to be something that you have to look for.

DG: I want to discuss some of the music as well. Looking at your last two albums, Pet Grief was a very clean album, lot of keyboards, not a lot of distortion. Why did you decide to go back to a noisier sound on Clinging to a Scheme?
ML: I don’t think we thought about it that way. We wanted to do more uptempo songs, really, and that was the output of those uptempo songs that we had.
JD: And we wanted it to sound more rehearsing space as well. The cleanness that you mentioned was something we kind of tried on that album. We always want to do something that we haven’t done exactly in the same way before, so after Lesser Matters, we wanted to do something that was the opposite of that kind of distorted home recording. Pet Grief was the result of that. But after playing all those calm, clean songs live for a year or two, we were kind of fed up… so we wanted to make something that was more uptempo and dirtier.

DG: There’s much more of a dancehall vibe to the new album. Were you been listening to a lot of dance music?
JD: Yeah, definitely. We like a lot of music. We’ve been listening to a lot of old Lover’s Rock things and Jamaican music. And a lot of guitar pop from the ‘80s. Anything really, as long as it’s good. You get pickier as you get older but at the same time, the number of genres that you tend to consume becomes more as well.

DG: Even on the noisier songs, your music has the feeling of having been very carefully produced and crafted. Can you walk me through what the recording process is like for a song? Do you spend more time writing or recording?
JD: It’s different from case to case. We try to finish the songs as quickly as we can because we don’t want to polish them too much, I think that was the case with Pet Grief. So this time, if we didn’t like a song from the start, we kind of abandoned it and started writing new ones instead. Sometimes we turn to songs and pick them up again, but we try not to overwork them. It’s easy to forget why you liked a song that you’d written if you sit around and listen to it hundreds of times.

DG: Clinging to a Scheme was delayed a few times. How long did it actually take to record it?
JD: We toured a year after Pet Grief, but then we started in January of 2007. So about three years, on and off. We lived in different cities, so sometimes there were months [in between].
ML: More off than on, I guess.

DG: When you weren’t working on the album, were you off working day jobs? What kinds of things were you doing in the meantime?
ML: [Laughs] Actually, the only thing we did was recording. The problem was living in different cities. We made so many songs — we started recording one week, then we had a two-week break and we came back and had like four new songs. We couldn’t stop working. I think we have maybe —
JD: 120.
ML: Yeah. Hundreds.

DG: It sounds like you could put out about five more albums this year if you wanted to.
JD: I guess we could. We rarely to return to old tracks and finish them. We try to make new ones, it’s more fun.

DG: I’m sure the fan site would love to get a hold of that stuff. I read an old interview that said you were collaborating with Jens Lekman on an album. What happened to that? Was anything ever recorded?
JD: I got a virus on my computer, I [had] just started working on some stuff that he sent me. That was back in 2005 or something like that, so I lost the songs and then we’ve never had another go at it. But we’ve been talking about it on and off as recent as just a couple of weeks ago. So we’ll see what happens.

DG: You’ve got a pretty full plate, is your plan for the next year to tour and then think about the next release?
ML: No, we’re recording, next week we start recording.

DG: Do you think it’ll turn into another three-year project, or would you like to finish something a little quicker this time?
JD: we’re planning to take a little bit longer this time.
ML: Yeah, maybe 10 years.
JD: No, just kidding. We don’t want to promise anything because that’s what happened the last time, we said to our label that we’re going to have an album finished by, I don’t know when we said, July or something in 2007, then they posted it on their website and it took another three years. So we’ll see.
ML: But we live in the same city now, so it’s better.

DG: To talk just a little bit more about your current work, there’s a line in “A Token of Gratitude” that goes, “Do I love you / yes I love you,” whereas on previous albums, it felt like the lyrics were coming more from a position of desire or longing than from the perspective of a relationship. Do you feel like your work has become more mature, in that regard?
JD: Um, not really, I think I’ve become more immature as a lyrics writer in a way because there’s a lot of things about revenge and paranoia and that kind of stuff. Holding grudges against people. In that sense, it’s kind of immature. But I think maybe the quality of the lyrics are a little bit better, hopefully.

DG: Revenge, paranoia –- are those feelings you’re having in real life or do the songs express more of a character?
JD: No, no, it’s definitely real.
ML: Definitely, yes. [Laughs]