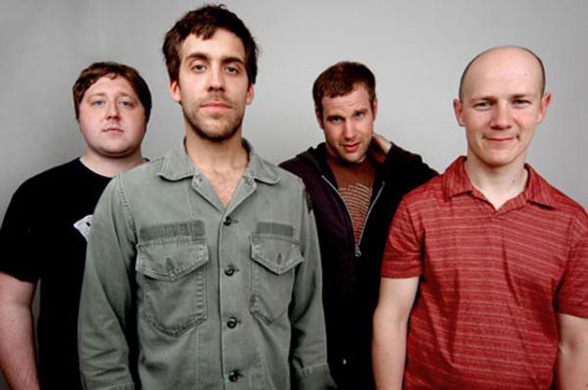 In 2005, depending on what country you judge your release dates by, Maritime released We, The Vehicles. The band’s sophomore record (not counting a previous lifetime of ’em by half the band as the Promise Ring), it combined a mature Davy Van Bohlen’s sharp cultural observations with equally cutting, pristinely recorded post-emo riffs. It’s pretty much perfect, so when the band weathered lineup changes and changed up their sound a bit for Heresy and the Hotel Choir, they almost couldn’t help but step down. But it and Human Hearts, the group’s first for Dangerbird Records, remain serviceable, largely satisfying guitar-pop efforts in a weirdly emptying genre. (Please don’t tell these guys the kids are listening to Tumblr rap.)

On songs such as “Air Arizona” and first single “Paraphernalia,” the group gives their formerly dry production a wash, opting for hesitant synth stabs and New Wave guitar sounds, respectively, while some scrambled vocals get egg on the face of “Faint of Hearts.” Elsewhere “Peopling of London” is the kind of wintry track that populated We, the Vehicles so well. The simplest stuff works best, though even at their most experimental, the group doesn’t move too far from their comfort zone. It’s a wonder Maritime doesn’t rival Death Cab for Cutie for popularity — the lyrics are less treacly, the riffs more freshly cut — and while Human Hearts may not make you fall head over heels, there’s a lot here to love.

Stream Human Hearts after the jump.