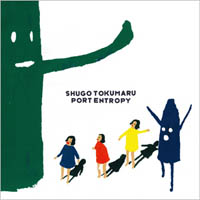 They say music is the universal language; if that’s true, they should put Shugo Tokumaru in charge of the dictionary. On the Japanese musician’s fourth full-length, Port Entropy, he communicates with music so emotionally vivid its meaning would be impossible to mistake. More often than not, that emotion is joy as bright as the noonday sun, his major-key melodies skipping like expertly thrown stones.

Tokumaru’s music is best compared to the clockwork orchestrations of Jonsi’s Go — a sound Shugo got to first. “Lahaha,” the new album’s best song, sets the tone with on-beat acoustic guitar chords weaved under flute notes, (I think) bright xylophone hits and shuffling percussion; “Drive-Thru” takes the pots-and-pans approach a bit more literally. Though the intricate acoustic instrumentation grows to Rube Goldberg proportions at times, on songs such as “Linne” and “Laminate,” his Paul McCartney-like tenor is allowed to shine over simple piano playing. The piano is a nice anchor for the musician: it signifies moments of melancholia amid arrangements that could easily turn too toy box childish. But Tokumaru is as keen a master of emotional tones as he is musical ones, and Port Entropy is a playground for kids of any age.

(Port Entropy is out now on Polyvinyl)