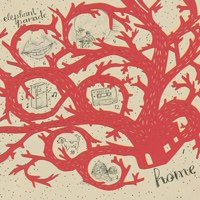 Most bands with guy-girl front-duos tend to improve when the guy stops singing: take Asobi Seksu or Camera Obscura. (The exceptions to the rule are generally Best Band Ever expectation-defiers like Yo La Tengo or, uh, the Velvet Underground.) On Elephant Parade’s Home, however, Estelle and Ido (who don’t list their surnames on FayBoo) share their duties with equal aplomb.

We hear Estelle’s first, on the album’s title track, and it arrives with breathy, waifish charm — Tracyanne Campbell in an East Village apartment. Ido’s tone is less pretty but no less affecting, as gravelly and sad as a wet dog dragged through a quarry on the pointedly titled “Happy.” Estelle matches his suicide-hotline readiness on the picked guitar ballad “Haystacks,” but a number of upbeat moments balance out the early ’00s Bright Eyes vibes: the title track bursts into a mini-Elephant 6 horn crescendo; “Crazy BF” borrows Postal Service synthesizers (and Ben Gibbard lyrical themes, though it’s a kinder, gentler heart possession); not to mention the ringing major chords and fine harmonies (!) of “Broken Fridge that Hums.”

You won’t make it through the record without a healthy tolerance for spare bedroom downers (two thumbs, this guy, etc.), but Elephant Parade offer a refreshingly capable spin on homemade sad-pop and sunnier efforts alike. Oh, and that battle of the sexes? Mission accomplished.

Stream and buy the album after the jump via Bandcamp.