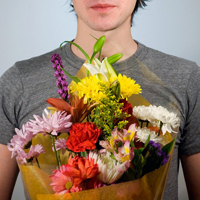 Last year, former Harlem Shakes (R.I.P.) drummer Brent Katz released a very fine, very unexpected chamber-pop record under the name Thunder & Lightning. It’s the sort of music that Wes Anderson might make, were he as skilled on piano and tenor vocals as he is with Final Draft. (Just kidding, everybody knows he delivers his scripts on a vintage typewriter with keys made from elephant tusks.) Katz was kind enough to make Rawkblog a wee mixtape, which you’ll find after the jump. Put The Royal Tenenbaums on on mute while you dive in? The words, like the picks, are Katz’s.

“Gigante”-Remate—I sometimes play this song on my keyboard at home for fun, and have toyed with the idea of recording a cover. My friend LD produced it. The singer’s voice is beautiful and effortless, and the way the arrangement builds, detail-by-detail, adds a dreamy urgency to that question in the chorus: Donde estan?

“Qui a Tué Grand-Maman?”—Michel Polnareff. The title translates to “Who killed grandma?” This is the first song I got into on Polnareff’s. French glam rock.
>> mp3

“Bright Circumstance”—Glass Ghost—Celebratory, dissociative music that feels like it always should have existed. Their newer songs, like this one, show that underneath the daring palette, what makes everything click is their amazing songwriting. This tune is going to be on an upcoming album, which they’re currently recording. Here’s a great quality video of them playing it live in DC:

“Bill Gates”—Lil Wayne. I Am Not A Human Being is great, especially this song, the title track and “Popular.” Can’t wait for the Carter IV. June 21st!

“Jackie”—Scott Walker—Here’s a song that legitimately changed my life. After having become obsessed with it, I knew that I wanted to rethink the way I wrote music. I began trying to learn French, so I could listen to more Brel songs in their original tongue. (This proved to be tough stuff, French.) As with most of the songs I hear and love, it was first introduced to me by my brother from another, Todd Goldstein, who plays in Arms. Jacques Brel and Scott Walker both became big figures in my life, and this song was the key that opened the door.

“Fleeced”—Arms—Arms, Glass Ghost and Caveman have already written my favorite albums of 2012. Here’s another youtube link to another song on an unreleased album. This one has the most wicked beat possible—objectively!—and is made of the stuff that allows mothers to lift cars off their children, i.e. the power of love.

“Me and Paravati”—Slapp Happy—Both this and their song, “Casablanca Moon,” have lyrics that make the hair on my arms stand up.
>> mp3

“Keep the Veil in Place”—The Double. I once saw this band play live during a transit strike in New York. I remember the entire evening with eerie accuracy now, though it was years ago. Their album, Loose in the Air, is one of the great overlooked albums of the past decade. This song has their usual always-awesome drumming and singular guitar tone, but adds some very cool falsetto-leaps by the singer.
>> mp3

“I’m Goin’ Left”—Syreeta. I have no idea what this song is about, but it makes me want to go to a block party where there are kids playing double dutch, and fire hydrants are spraying, and someone’s handing out political buttons.
>> mp3

Léo Ferré—Comme a Ostende–I tried to put some variety into this mix, but mainly what I listen to is mainstream hip-hop, and French music from the late ’60s and early ’70s. Some singer-songwriters obsess over Bob Dylan, and others prefer Serge Gainsbourg, Jay-Z, Lil Wayne, Francoise Hardy, etcetera. This is a Léo Ferré song I love. Few songs these days could be described as ‘martial,’ which is probably for the better. But when it works…