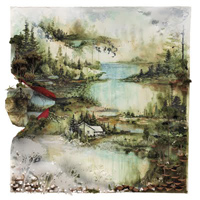 I’m well-documented as a Bon Iver hater, so I’ll keep this brief: I gave this record an honest listen, whatever that means, and probably would’ve ignored it entirely if not for the Pitchfork 9.5. If Mark Richardson honestly thinks this album is nearly a point better than Kaputt, I suppose I can give it a few minutes of my life.

And here’s the thing: this is a pretty good record! Opening track “Perth” is a monolith of a song, all bone-chilling guitars and militant drums, but when the vocals came in, I shuddered involuntarily and remembered I was listening to Bon Iver. The arrangements and production are the stars here, or at least won’t set your teeth on edge. Throughout, Justin Vernon choses blanket-warm guitar tones and uses them in the service of thoughtful arpeggios and chord changes. The drums are even better, avoiding standard-issue rock beats in favor of alternately brisk pattering or heavy grooves; the horns on “Minnesota, WI” and “Towers” are more Dave Matthews Band than Clarence Clemons, which I hope Colin Stetson takes as a compliment. The interplay of sax and strings on songs such as “Michicant” and “Towers” remind me of the forgotten, five-star Sea Snakes’ Clear as Day, the Darkest Tools, which is damn near the highest compliment I know how to pay. “Holocene” is almost perfect: the way the Insignificance-style drum fills arrive discretely under the guitar riff as it enters the second verse? Stunning.

It seems obvious from the get-go that this is a drastic improvement over For Emma, Forever Abro, and I have to give Vernon credit: there is flat-out fascinating music here, and it’s amusing enough if often jarring to see him attempt to marry his clear R&B vocal influences (read: sexy falsetto) with ’90s slowcore and early ’00s chamber-folk. Vernon loves singing, enough to subject us to a half-dozen editions of his harmonized bleating on most of the songs, and it turns what could’ve been a mere bother completely insufferable. “Wash.” sounds like James Blake: Cabin Fever, and it’s probably the best performance of the lot. The vocal decisions never really work for me, and essentially my gripe with this record is a simple one: I can’t get through it without wishing Mark Kozelek or, hell, Dave Matthews was singing all the songs.  I submit this for your hipster credibility: Listen to Matthew’s Live at Luther College performance of “#41,” take a long, hard look in the mirror and tell me you don’t agree.