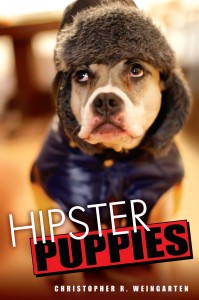 For some writers, certainly this one, seeing a Tumblr blog get a book deal is like being an indie-pop band hearing the Cults record. “I could do that!” you think, atwitter with jealousy and regret. “My three-year-old could do that and I don’t even have one!” But not all of us can be toddlers. Music critic/Twitter iconoclast Christopher R. Weingarten has been pairing photos of dogs in glasses with amusing captions for months now, and frankly, they’re pretty funny! It’s not his fault he got to it first. Or maybe it is, in which case we give him full credit.

At any rate, the book version is due July 5: give Chris some money and maybe he’ll be less cranky about your favorite buzz band (but probably not).