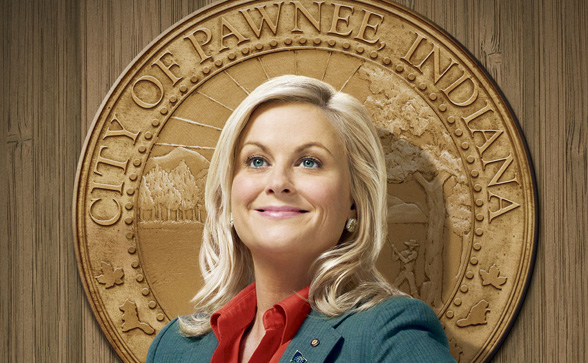 Presumably we all like more than just music. I’m going to start checking in once a month or so with what I’ve been watching/reading/otherwise enjoying. Here’s the first installment. Feel free to chime in in the comments!

Given NBC’s general troubles, it’s a tiny miracle that the network’s comedy lineup remains indefatigably funny. After watching the first three seasons of Parks and Recreation, the show only gets better, as truly great shows do, as you get to know the characters’ flaws and foibles. What makes Parks and Rec particularly strong, beyond the ridiculous cast (Amy Poehler, Rashida Jones, Aziz Ansari, Aubrey Plaza, Adam Scott, Chris Pratt, Nick Offerman and so on — all comedy all-stars, even Rob Lowe!) is its humanity: unlike The Office, which laughs into the tears of its workday drudgery, the show seems to have a genuine affection for its characters. It would never put them in an unsympathetic position. And while most of them don’t like their work, there are plenty of things they do like — steak, Banana Republic sales, painting their bosses topless as noble centaurs — which makes them personable and relevant beyond the weekly plot arcs. Those are also terrific.

30 Rock‘s fifth season was less outrageous and punchline-hitting than previous seasons, perhaps, but most of it — especially the first half — is still brilliantly absurd. The last three episodes sort of collapsed into unfunny plots for the first time in the show’s history, which isn’t the strongest indicator for Season 6, but surely Tina Fey’s not done yet.

A few episodes into Season 2 of Battlestar Galactica, I’m simultaneously relieved that it’s so much less complex than, say, Lost, but also less interested in the characters. Some of the drama seems contrived (“We’re being attacked by Cylons, again! Will they blow up the ship?!?!?!), which doesn’t help, but the larger religious and political themes are a strong enough framework to keep me watching. If the endless tension of waiting for someone else to be a secret Cylon assassin doesn’t kill me first.

I recommend watching the first 20 minutes of Cool Dog and Hilary Duff’s Beauty and the Briefcase, both on Netflix Instant; both become unwatchable after this point, but there’s more than enough unintentional comedy before that to make them worthwhile scans.

Captain America was better than I expected, and better than it deserved to be considering its director previously helmed The Wolfman. But it’s an expertly paced romp, painted in the bold colors we want from comic book films without sacrificing a reasonable amount of character development or a coherent plot. I enjoyed all the major comic book movies that launched this summer, to be honest, though Green Lantern is a narrative mess, X-Men: First Class tossed away a perfectly good movie with its rushed, cliched second hour and Thor used Natalie Portman in her usual life-changing capacity without giving her enough room for that to make sense. (Cap and Thor were the best overall, though, which bodes well for Avengers.)

I’m halfway into Neil Gaiman’s American Gods; it’s a great premise and an interesting enough page-turner, though the plot’s a bit aimless and the prose wanders between sparkling and indulgent. His Sandman is my favorite comic book series ever, and in this case, a more graphic medium might’ve suited the material better. Still a few hundred pages to go, though.

I still haven’t finished the single-player mode of Call of Duty: Modern Warfare 2. I know! Assassin’s Creed 2 is up next, because it was on sale and I didn’t want to skip to Assassin’s Creed 3.

In Culver City, Akasha’s happy hour — half-off the restaurant’s $12 cocktails — shouldn’t be missed. I’ve been spending my afternoons writing at Teaforest, which offers fine sandwiches, teas and coffees and a well-selected indie-rock soundtrack. It’s also generally not very crowded, so, uh, don’t go. Mandrake is the only bar in the neighborhood with any sort of hipster vibes and like every other Los Angeles bar is impossibly crowded on Saturday nights, but go early or any other day and it’s quite the time. Especially compared to the frat-boy vibes in most of downtown Culver. Parks and Recreation sometimes-star Nick Kroll is a fan, so there you go. Not recommended: trivia nights at Busby‘s on Wilshire, which took longer than Parks‘ entire first season.