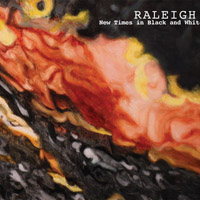 In our standards-slashing age of D.I.Y.W.Y.M.B.P. (do it yourself with your MacBook Pro, natch), craft — from multi-instrumental arrangements to crisp recordings — deserves more attention than ever. That’s not to say Raleigh doesn’t bring the songs on its debut album, New Times in Black and White, but it’s the sound that you’ll revel in. The Calgarian band draws on the influences of its countrymen: Owen Pallett-esque strings run parallel to Arcade Fire-edgy electric guitars, while Matt Doherty’s brisk percussion would be at home in Broken Social Scene or the defunct Sea Snakes. Unique to the band are the harmonies of Clea Anaïs and Brock Geiger, whose voices twine together like blue and red strings. The pair’s efforts are bewitching in the folk lament “Murderer”; the Geiger-led “Godspeed” is a standout ballad, while Anaïs’ syncopated “Marrow” is the closest the group comes to pop bounce. At times, the band seems unsure of where to take its compositions, but with music this vivid, the journey’s the destination. Hear the album in full after the jump.

(Buy New Times in Black and White on Bandcamp)