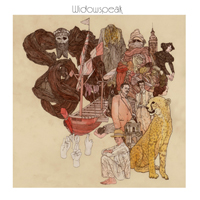 I saw Cat Power for the third time in Vegas, at the Matador at 21 festival. (The first and second: an unmemorable pre-sobriety outing at Arthurfest in 2005 and a successful post-sobriety set at Coachella 2010.) It was oddly appropriate: in talent if not in body, Chan Marshall had become fat Elvis, singing other people’s songs through a one-size-fits-all Memphis soul filter without a hint of the angst or urgency that characterized even ’06 comeback The Greatest. She might as well have walked into the Mirage buffet and come back with four bowls of oatmeal. (For the record: outside of this analogy, I fucking love oatmeal.)

Widowspeak has more omnivorous interests. The Chicago three-piece, fronted by Molly Hamilton, has rightfully drawn comparisons to Cat Power: its singer offers the same woozy, boozy hushed drawl, perking up only for the occasional chorus. You Are Free tracks such as “Speak for Me” and “He War” are good reference points, but Widowspeak — at its best, which is its most energetic — takes Marshall’s recent Southern affections and moves them west. “Gun Shy,” the debut album’s best tune, offers flamenco strumming and the kind of electric lead that probably soundtracks Quentin Tarantino’s more interesting dreams. Along with “In the Pines,” it’s the cowboy noir Neko Case does so well, though her iron-lunged approach would make Hamilton turn blue. “Half Awake,” for lack of a better term, is plain old indie-rock, fuzzy and upbeat, as is the pounding chorus of “Nightcrawlers”; the brisk but tender “Hard Times” finds a twee track putting its boots on.

It never ranges too far afield, but at times, Widowspeak feels like it could use more direction — is it a garage-pop record? red-eyed alt-country? gloom-rock? — but it’s a minor problem for a generally tuneful album that offers both a reminder of the possibilities of breathy chanteuses and Cat Power’s own lost opportunities. If she does Covers Record 3: Songs To Drink Frappucinos To, “Gun Shy” would make a good start. (Speaking of covers: Widowspeak do a fine “Wicked Game,” though it’s impossible to top Chris Isaak’s original).

(Widowspeak is out now on Captured Tracks)