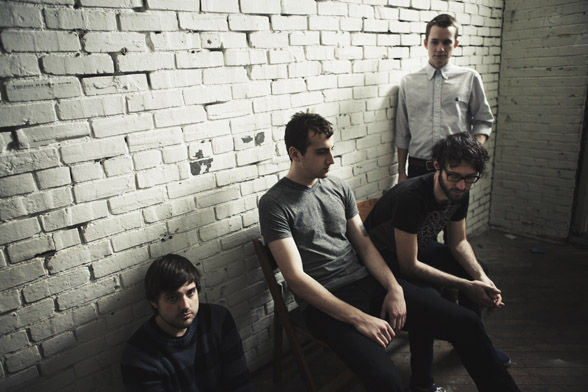 Actual guitar-toting indie-rock bands are about as endangered as Siberian Tigers these days, but Cymbals Eat Guitars are keeping the music very much alive. On the band’s debut album, Why There Are Mountains, they nodded toward ‘90s heroes such as Pavement and Built to Spill; this year’s triumphant sophomore effort, Lenses Alien, is a broader, bolder release that finds the group balancing between extremes: eight-minute opuses compete with three-minute pop gems, full-throated harmonies nudge up against catastrophic dissonance. We spoke with bassist Matthew Whipple last month to discuss the band’s secret pedal-making weapon, Elliott Smith’s influence and their New Jersey connection with Yuck. The band plays the Echo tonight.

David Greenwald: The album’s been out a week now, how has the response been so far?
Matthew Whipple: The response has been really great so far. It wouldn’t be accurate to say there wasn’t a certain amount of hand-wringing on our part about what the critical response was going to be because obviously that was a big part of our initial success with the last record but it’s been really pleasant thus far. We’ve been really pleased.

DG: It seems like the band was able to take its time between the debut album and this one. Did you feel like that was the case?
MW: Actually, on our end it feels like we never stopped working, when it comes to touring and then suspending touring to finish writing the record. It’s different sides of the business of being a band but we’ve been pretty much noses to the grindstone for what feels like the past two, two-and-a-half years.

DG: How much time did you spend recording the album?
MW: Actually recording, we were only in the studio for 15 days. Our producer, John Agnello, kept the vibe very workmanlike but relaxed. We got a lot done in a very short amount of time.

DG: What was working with him like? He has a pretty impressive resume.
MW: It was amazing, he was on a very, very short list of dream producers to work with. When we finally met him about a year and a half ago, he turned out to be a very friendly, down-to-Earth guy. He came and did some initial pre-production work with us over about 9 months, he would show up for rehearsal every couple months or so to just see how songs were shaping up and give us advice and direction on arrangements or what kind of songs we need based on what we showed him. So he definitely had a very hands-on, traditional producer’s role in that regard.

DG: The album begins and ends with some pretty aggressive screaming. Why make the noisy parts the bookend?
MW: Once we had finished writing the record we had some idea of what the sequence would be, but John encouraged us not to really think like that, to go in and make each song as good as it can be once we got into the studio. Once we actually finished recording and we really got down to sequencing, we had thought of different sequences, where “Rifle Eyesight (Proper Name),” the first song, was more of the centerpiece of the record, something to open up side B, but it just became apparent to us, listening to how the songs came out, that it better served the record as more of an overture. It sort of introduces the palettes that you’ll hear later on. And then “Gary Condit,” the last song, as soon as we had finished writing it, we looked at each other and said, “This is the album closer.”

DG: Do you feel your fans are the type to sit down with an album and take it start to finish?
MW: We definitely still think that albums are important and that’s the kind of artistic statement that we like to make. When we write songs, we’re writing songs as pieces of a whole and we’re definitely writing songs in relation to the other songs that already exist for that record. I think that the four of us just happen to be fans of albums and the ritual of putting it on the turntable and listening to the whole thing straight through. So it’s how we think about music. We definitely had kind of a hard picking out songs that were going to be stand-out tracks to preview the album. We have a hard time thinking about singles in general.

DG: I read your “Under the Influence” Stereogum article the other day and didn’t notice Elliott Smith on the list. I definitely hear some Figure 8 on some of the harmonies on “Shore Points.”
MW: Yeah, most definitely. I think we’re all huge Elliott Smith fans, Joe [D’Agostino] in particular, I even think a number of the songs on the record are written in a guitar tuning that Elliott had used quite a bit. Leaving that off that list was just one of those things that we didn’t even think about, it just goes without saying, like Pavement or Modest Mouse.

DG: I love the line on “Another Tunguska” about slap bracelets. Do you guys have any old middle school collections or things left over from childhood?
MW: I wish, I don’t think so. My parents’ house got pretty hard [by] Hurricane Irene. Helping them clean up, I found a bunch of my stuff from middle school and high school sitting around in the basement. Mostly just my CD and DVD collection, I think at this point having a physical CD collection would be along the line of having a collection of slap bracelets… or something like that, totally retro, totally uncool.

DG: You spend so much time on the road, it must be hard to collect anything. Does anyone in the band have a hobby they keep up?
MW: If anybody has a hobby, it’s probably Brian [Hamilton] but it’s more of a small business for him. he has a company called smallsound/bigsound, where he builds pedals for guitars and bass, keyboards and stuff.

DG: Is he making stuff that you’re are using as well?
MW: Me and Brian and Joe, we all use effects pedals and half of our pedal boards are all stuff that Brian has built for us.

DG: Are there sounds that you have in your mind and or reference on records and go to him for that?
MW: That’s pretty much precisely how it goes. Either Joe or myself will go to Brian and say “I need this kind of sound” [and] he’ll either have something that already does that or be able to design something that does it pretty easily. I needed some sort of pedal to make my bass guitar sound more like a regular guitar, trebly and crisp, for our song “The Current,” because that fingerpicking part is actually on the bass. He already one of his production pedals was already doing that so he just gave me one. It’s super-sweet to have a pedal designer in your band.

DG: Yeah, that’s awesome. There’s so much attention right now on dubstep and dance music and synthesizer bands—what keeps you all excited about guitar rock?
MW: For me personally, I like to delve into old music. Joe just plays guitar all the time and he just has his own rabbit hole that he goes down in terms of what he wants to do with the guitar. With that kind of music definitely being the most popular kind of new music nowadays, I guess it’s tough not to feel marginalized a little bit, but not really. A lot of that stuff is really cool. I am kind of hoping for a resurgence in guitar music though, that’s where all of our hearts are at the moment.

DG: Can’t argue with that. Are there any current bands that you look to as colleagues or inspiration?
MW: The first time that we played in London, we did an in-store at Rough Trade and Johnny the drummer from Yuck, who’s actually from New Jersey, showed up at our show and pulled us aside afterward and was like, “Which one of you guys is from New Jersey?” And we were like, “We’re all from New Jersey.” And this is before any Yuck tracks hit the Internet. He said, “Oh yeah, I quit school to move here and join a band.” We were like, “Oh, good luck, dude.” And then a few months later, Yuck are a pretty widely known band, that’s definitely the first one that comes to mind. Avi Buffalo as well. The stuff that he does with guitar and with his voice is really inspiring.

DG: I just saw them at FYF Fest, they were great.
MW: Were they good? I heard he’s been playing with a crazy new band.
DG: I saw them earlier in the year and it was a pretty different lineup. He had a rapper come out to do a few verses. I don’t know, it’ll be interesting to see if that was just a one-off.
MW: He’s been posting some weird tracks to their Soundcloud page, I don’t know if they’re demos or jokes or what. He’s got sort of a Ryan Adams thing happening. [Like], “I’m gonna record some goofy thing and put it on the Internet.” Which I guess is pretty fearless.

DG: Anything else you wanted to mention?
MW: Tour starts in two weeks. We’re excited to hit the road again.

DG: How long do you think you’ll be out? Another year, 18 months?
MW: I hope so. As long as people will have us, as long as there’s demand. We’re in it for the long haul, so hopefully it’s a longer period than a shorter period before we can go away and make a third record.

(Lenses Alien is out now on Barsuk)