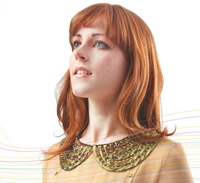 Hannah Peel’s debut album is a record of elegance and humor, a combination only improved by its rarity. “The Almond Tree” opens The Broken Wave with a somber piano line and a feather-light vocal, a porcelain veneer broken by the oom-pah rhythm section that swoops in like the town busybody. An electric guitar adds unexpected grit to the mix, and by song’s end, we’ve arrived at something of a mission statement. It works better as that than a composition in its own right, but there’s no lack of strong material here. The horns-and-strings-aided “You Call This Your Home” turns its title into a resolutely harmonized refrain; “Song for the Sea” lets her thin, lovely voice reach its greatest heights; wounded piano ballad “Unwound” evokes Fiona Apple’s early work.

But Peel most reminds me of Sally Seltmann’s work as New Buffalo — there are similarities in their matter-of-fact melodies, particularly “Today Is Not So Far Away’s” maze-like chorus, but it’s the soft colors of the shifting arrangements that make them true contemporaries. Peel never uses a roar when a whisper will do, a trait that may make The Broken Wave too subtle for some. That said, the album is a mere 35 minutes: if you sat through that three-LP Joanna Newsom set, the least you can do is give this one four or five spins.

(The Broken Wave is out now)