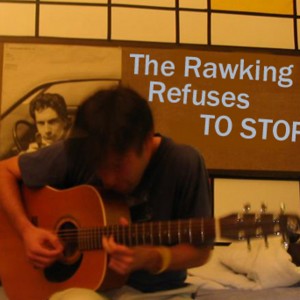 Hello, friends. Without breaking too deeply past the blogger fourth wall, I’d like to share some notes from the underground with you. As you may know, my non-Rawkblog hours have been occupied by full-time freelance work in recent months. You can now find my music writing regularly-ish on Billboard, MTV Buzzworthy, the Los Angeles Times, the A.V. Club and eMusic, among others. For the latter two publications, I’ve been writing album reviews — the work I dreamed of getting paid to do as a snobby 17-year-old writing Coldplay screeds and reading Pitchfork in journalism class. It’s been a treat. “But what does this mean for Rawkblog?” you’re wondering, your lower lip quivering like the entire cast of The Help. “And why are you writing so much on Tumblr and Twitter?! Don’t you love us anymore? What happened to that record club?”

Here are some answers. My Mercury Music Digital Record Club launched in November. It has, at this moment, 73 paying subscribers. A handful more have tried it and quit, but most people have been extremely complimentary about it. In short, each week those people have gotten a Spotify playlist with two albums (one brand-new, one vintage) and a newsletter with capsule reviews and a round-up of the week’s key news and links. Membership includes a one-time personalized mixtape, where you tell me what you like and I tell you more things you’ll like. (It feels like an extremely silly skill, but — as long as you mostly like guitars! — I’m pretty good at it.) Here’s what a weekly newsletter looks like.

Rawkblog makes enough money, barely, to buy my fiancee dinner once a month. This is actually a blessing: it means I can continue to write here with complete independence and without worrying about hitting pageview counts or appeasing advertisers. However, Rawkblog is now almost seven years old and I’m not a kid in college anymore: I have a two-bedroom apartment and a future wife and a cat. (#Humblebrag? Actual brag?) As Mercury membership grows, I’m going to shift more of my writing and music-sharing energies from here to there. Some of that content will probably find a home here eventually, but my hope is that devoted readers will choose to join the Mercury community and help it evolve into a sustainable platform for supporting music discovery and writing. And, yes, paying my rent. Again, you can find all the details here.

The influence and value of blogs like this one are waning, and frankly, posting remarkable songs to 0 comments every day has stopped feeling fulfilling. I know you have plenty of MP3s in your RSS feed. I decided a long time ago Rawkblog would best serve its audience by being mainly a music blog; I haven’t put the same restrictions on my Twitter and Tumblr pages. The freedom that’s allowed me is fun, but the discussions and responses they’ve encouraged is even better. I get more notes on one Tumblr post than six months’ worth of Rawkblog comments. As a writer, who gets paid sometimes in dollars and often in good vibes, this is basically drugs. Pros/cons: Rawkblog will never post something I don’t feel is relevant and worthwhile for you, the audience. Twitter and Tumblr are just an X-Ray machine into my brain, for better or generally worse. Being a “relevant tastemaker” “on the cutting edge” of “underground culture” (not really, at all) is a lot of work: sometimes I’m hungry and thinking about frozen yogurt and that’s what comes out! You should follow me in these places accordingly.

But: Rawkblog still exists and will continue to exist. I’d like to make some changes. Format-wise, I’m probably not going to write full-on album reviews here anymore. It’s unfair to you and the bands to try to squeeze more out than I’m already writing for my freelance outlets and Mercury. Instead, I’ll be discussing and recommending albums briefly under a new banner, probably “Now Playing” or “On Rotation.” Who knows, maybe I’ll talk more about feelings and less about guitar tones. Tracks, videos, concert photos, bootlegs and mixtape posts will all continue — some of these features need to get picked back up, and will if time ever allows. I’ll be linking out to my other writing more here as well: I assume you’re still interesting in a Rawkblog review that landed in the A.V. Club instead. In terms of posts per week, five feels like a hefty number. I’ll be shooting for three or four a week from now on, with Fridays probably an off day. If you don’t want to bother clicking here every day, you can follow this via RSS. I post most of the links on Twitter. A question for you, since you’re still here: would you like weekly Los Angeles concert picks? Because I’m happy to provide them if they’re actually helping you with your Friday nights.

In the Good News Dept., here’s what’s coming up:

1) a Rawkblog redesign which will better showcase my photos and make this aging template a little more modern and readable. That’s coming in the next couple months, or as soon as my web designer wraps up his finals.

2) A SXSW party, Rawkblog’s second. I’m teaming up again with TwentyFourBit and we’ve booked a lot of our favorite recent bands. More details on that when they’re wrapped up.

3) A “Rawkblog is 7” birthday party in March, hopefully, because this old hunk of HTML deserves it. Bands and venue TBA.

Thanks for reading. (Please don’t stop!) It really does mean a lot. You’re officially invited to come to Austin and drink free beer and eat too many tacos with me.