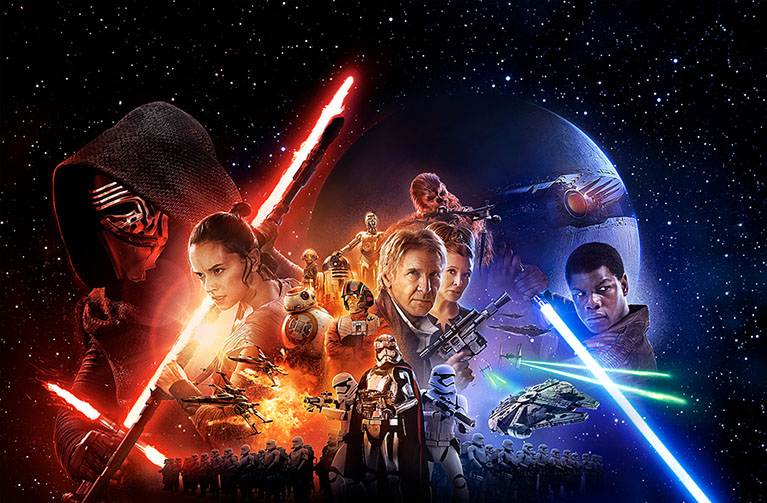 Star Wars is a film series in the way Christmas is a day off from work, in the way your mother is the landlord of the house you used to live in. For millions of people, its imagination, adventure and battle of good against evil is a rich and fundamental mythology. Han Solo’s roguish charm. Chewbacca’s true friendship. Obi-Wan Kenobi’s deep wisdom. Leia’s rebellious strength. Luke’s wide-eyed wonder, and then the shadow of experience. Family and betrayal, fear vs. hope, interstellar travel and whimsical smuggler cantinas. It all does what the very best art does: it speaks to us. It transports us. It becomes part of us.

So I am not interested in any conversation about Star Wars: The Force Awakens, the seventh “episode” of the film saga and first in its Disney revival, that is not an emotional recap. “What did you think of Star Wars?” is an inadequate and distracting question. Grading its narrative choices or internal coherence is like discussing the nutritional content of a warm apple pie. But “how did Star Wars make you feel?”—we can start there.

I saw The Force Awakens on Friday, opening night: it may not have been the midnight frenzy of Thursday, but three hours before the screening, dozens had arrived in line. Parents led children in Jedi robes down the sidewalk. Adults flicked on their lightsaber toys into glowing red and blue.

I was nervous that the film would feel less than worthy of its name. I was nervous to be so excited. But I was excited to be excited, to acknowledge the tightening feeling of anticipation overshadow the rest of the world, like a Star Destroyer entering the frame. The boy next to me asked how much longer we’d have to wait. 40 minutes until doors. His face wrinkled and smoothed into patience.

Sitting in the fourth row, M&Ms, popcorn and pizza acquired, we waited, the seats around us full and electric with anticipatory chatter. Whatever happened, we would share it together. A gleeful usher explained our exit logistics and asked us not to share spoilers on Facebook after: that shit is rude. You only see Star Wars movies for the first time once. Someday The Force Awakens will be watched on airplanes, on Netflix, on 4″ phones, but it won’t be the same.

God, what a feeling. We cheered at everything. The familiar yellow-font explanation of confusing space drama. (The Resistance and the Republic? Huh?) The moment Han Solo and Chewbacca stepped into the frame, older but otherwise unchanged. General Leia—and the big reveal in the film’s final moments. We were clapping and shouting in gratitude. The Force Awakens took us back, to childhood, to family, to awe and suspense and wonder. I do not believe we were the only ones: there is a warmth to Harrison Ford’s performance here that goes beyond any of his character’s potential aging and mellowing. He gets to be Han Solo again, and he too, is grateful.

There were, of course, elements of The Force Awakens that grow silly if one ponders them too long. It borrows heavily from A New Hope, nearly to the point of repetition. The believability of bad guys following up two failed Death Stars with a bigger, planet-sized one is maybe a comment on the weapons obsession and wasted billions of the U.S. government, but maybe it’s just ridiculous and unlikely. Our new heroine, Rey, is a fusion of Han Solo’s smarts and Luke Skywalker’s chosen-one powers—but this is thrilling and fully realized, the sexist critique of one screenwriter notwithstanding. In the most interesting variation, Kylo Ren is at first a stunning force master, able to trap a shuddering blaster beam in mid-air, but soon he’s a tantrum-throwing baby, an uncertain shadow of Darth Vader.

The Force Awakens walks a narrow line between progress and nostalgia, and if it misses an opportunity or two, it’s in service of never coloring outside the lines that define the saga. It does what we, or I, wanted: it feels like a Star Wars movie, a feat Episodes I-III never really accomplished. The Force Awakens has heavy expectations, but it also comes as a welcome apology. “You’ve been burned before,” it knows. “Come back. It’s real this time.” Any event, detail or character is secondary to that accomplishment. Like the wardrobe that opens to Narnia, The Force Awakens leaps into hyperspace and brings us back to the world we’ve dreamed of.

There are uncertain, incomplete elements in the film—Ren’s turn to the dark side, Rey’s origins and prodigious force ferocity, and other bits and pieces of the 30 years of chronology The Force Awakens evades—that are already being argued over, though impatient viewers would do well to remember it took a full two movies for Luke Skywalker’s parentage to be revealed. Episodes VIII and IX are still coming! Star Wars is not a crime procedural: is knowing or guessing what happened in a vast, mysterious fictional universe really more interesting or satisfying than letting the films show us? All I wanted at The Force Awakens was to see a Star Wars movie. I did. Right now, that’s enough.